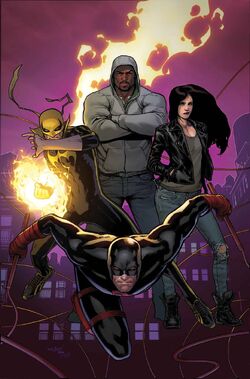 When the trio of heroes Daredevil, Iron Fist and Luke Cage interfered with the operations of rising crime lord Diamondback, they were dealt heavy blows in return.[1] As they were looking for leads on Diamondback together with Luke's wife Jessica Jones, Daredevil noticed it could help people know that they actively worked together.[2] They continued operating as a team to investigate Diamondback, and eventually became known as the Defenders.[3]

When Luke came alone for Diamondback, he was almost killed when Stryker used toxic dust on him.[2] The Defenders retaliated and ambushed Diamondback at the Club Ultimate. Though hurt, Diamondback escaped, displaying previously unseen superhuman strength and speed.[4] Diamondback was finally defeated by Iron Fist when Stryker attacked him and Jessica while they were on a stake-out. Stryker was arrested but escaped while being transported.[3] The Defenders tracked him down and defeated him even though he had ingested the power-bestowing drug Diamond, leading to Diamondback's second arrest.[5]

Shortly afterwards, the entirety of Manhattan became trapped below a Darkforce dome cast by Hydra as part of their plan to neutralize the American superhero community when they took over the United States.[6] The Defenders were among the heroes fighting tooth and nail to fend off against Darkforce demons and assist the inhabitants of the island with the diminishing resources available.[7] When the Darkforce dome was finally destroyed,[8] the Defenders joined the last stand against Hydra in Washington, D.C.[9] after which the heroes eventually triumphed.[10]

The Defenders then were present at Diamondback's trial, from which he walked away free thanks to a lawyer provided by his secret backer, the former Kingpin of crime Wilson Fisk.[5] Jessica enlisted Deadpool's help to find Diamondback while Daredevil interrogated Elektra Natchios, who had returned to New York hired by yet another mysterious party to find Stryker.[11] After subduing the Punisher, who was spying on the team, and beating up Deadpool over his usual shenanigans, the Defenders learned The Hood had entered the race to become the new Kingpin.[12] The Defenders confronted Diamondback outside a club he had taken over from Hammerhead, and he revealed he had gathered a group of superhumans on his own to rival the Defenders, these villains were the Fixer, Titania and Moonstone. Luke Cage went toe-to-toe against Dimaondback while the rest of the Defenders defeated the supervillains. Stryker was finally taken down by the Black Cat, who shot him repeatedly in the back with an automatic rifle, though she didn't kill him.[13]

With Stryker taken care of, the Defenders turned their attention to The Hood, who had seized Diamondback's operations following his defeat. Thanks to intel provided by the Black Cat, the Defenders attacked The Hood in his own penthouse, but he managed to fend them off before escaping. In preparation for their next encounter against Robbins, the Defenders gathered numerous allies, and attacked him while he was holding a meeting with other supervillains he wanted to draw into an alliance.[14]

Like this? Let us know!
Retrieved from "https://marvel.fandom.com/wiki/Defenders_(Manhattan)_(Earth-616)?oldid=6098173"
Community content is available under CC-BY-SA unless otherwise noted.