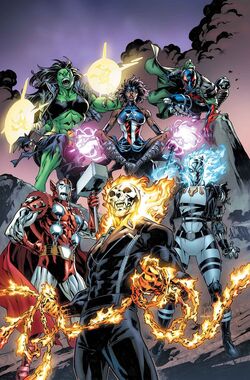 The Defenders of 2099 were a group of like-minded individuals who came together to fight the Martian Masters of the Alchemars Corporation. After a fateful encounter with the time-traveling Ghost Panther who traveled there to restore the timeline by putting an end to the Martian invasion teamed up with the Defenders to do just that.

The Defenders, with the help of T'Challa's spirit of vengeance companion Zarathos possessed Mars and used the echo of the tortured planet to deliver vengeance on it's ungrateful children. The attack was a success with the Martian's defeat but T'Challa noticed only a small change within the timeline which also left him stranded in the future with the Defenders.[1]

Retrieved from "https://marvel.fandom.com/wiki/Defenders_2099_(Warp_World)_(Earth-616)?oldid=5238518"
Community content is available under CC-BY-SA unless otherwise noted.