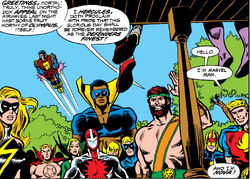 When the Defenders' associate Dollar Bill created a documentary about the group and aired it on television without their permission, it attracted a group of super-heroes who were interested in joining the group. They were interested in joining because of the Defenders' lack of rules and loose formation. This led to a disaster as the large group of different personalities often clashed and the poor leadership of this large group (led by long-standing Defenders Nighthawk, Valkyrie and Hellcat). Their first and last mission was against a team of super-villains (Led by Libra and Sagittarius) who had joined together. The villains also called themselves the Defenders, using the publicity of Dollar Bill's documentary to give the Defenders a bad name.

Although they managed to defeat the villains, the experience proved to be so haphazard, and disorganized that all the "Defenders for the Day" quit.

Like this? Let us know!
Retrieved from "https://marvel.fandom.com/wiki/Defenders_for_a_Day_(Earth-616)?oldid=5704152"
Community content is available under CC-BY-SA unless otherwise noted.