Defenders of the Deep 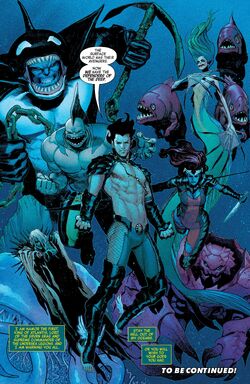 This holy war has just begun. And we will not misstep as we have in the past. No more armies hitting the beach. No more invasions. Let the air-breathers have their mounds of dirt and blackened skies. We fight for the seas, and those who called them home. The surface world has their Avengers. Now we have the Defenders of the Deep.

After tearing down Russian submarines in the Black Sea, the Defenders of the Deep attacked the international undersea research station Hydropolis. They were intercepted by the Avengers, and a fight broke out after the heroes attacked Namor's Piranhas to stop them from eating two bystanders despite Namor ordering them to stand down. The Winter Guard arrived to retaliate against the attack on the Black Sea, and worked with the Avengers to take down Namo's team. During the fight, Manowar was killed by Crimson Dynamo. However, tensions between the Avengers and the Winter Guard arose after She-Hulk attacked Perun and Chernobog to stop their in-fighting. While the Avengers and the Winter Guard fought each other, Namor killed the Piranhas due to their continued misconduct and ordered the Defenders to retreat.[2]

The Defenders of the Deep next attacked a Roxxon oil drilling platform in Alaska, but they were repelled by the Squadron Supreme of America, at the expense of Orka.[3]

Like this? Let us know!
Retrieved from "https://marvel.fandom.com/wiki/Defenders_of_the_Deep_(Earth-616)?oldid=5547399"
Community content is available under CC-BY-SA unless otherwise noted.