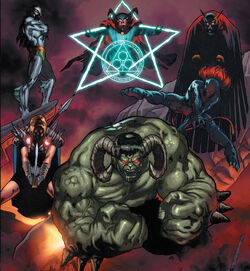 The Defenders were among the gathering of heroes present for the vigil at Mar-Vell (Earth-10011)'s deathbed, and were seemingly among the first to succumb to the corruption of the Many-Angled Ones.[3] They became known as the "Defenders of the Realm".[1][2][3]

The Defenders were sent to defend their world from an assault by the Guardians of the Galaxy. Seemingly evenly matched, the team, due to their realm's lack of death, was able to come back from killing blow after killing blow, but was eventually wiped out by Thanos, who seemingly had the power to bring death to the deathless universe.[4]

Retrieved from "https://marvel.fandom.com/wiki/Defenders_of_the_Realm_(Earth-10011)?oldid=5872276"
Community content is available under CC-BY-SA unless otherwise noted.