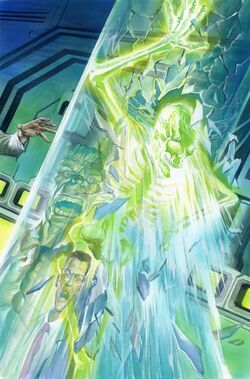 Del Frye was a rich and popular, yet humble, college student living in the small town of Turango, Colorado. He was the star quarterback of a collegiate American football team. Since Del intended to become a professional player, his father, Dr. Frye, pressured him into taking a serum he had created based on Gamma radiation. Dr. Frye expected the serum to help Del improve his physique in order to prevent eventual injuries he expected his son to endure playing football. Unlike his father, who had also injected himself with the serum, Del suffered side-effects from the injection immediately. His eyes turned a deep green, and green blood began pouring from his mouth and eyes as he hallucinated about a Green Door and a being beyond it, before he collapsed dead.

Dr. Frye covered up Del's death, and the town simply believed the boy died suddenly due to natural causes. Because of this, Del was given a standard burial at Green Peak Cemetery, and the distance between the casket and the ground was too shallow to contain the radiation emanating from the body. As mourners visited the grave, they were infected with gamma sickness, and began to die as well, spreading what the locals dubbed a "Chain of Grief." While drifting across the country, Bruce Banner learned of this regional illness. He visited Del's grave and identified the gamma radiation coming from it. Before confronting Dr. Frye, he called the E.P.A. to alert them of the situation. When Del's remains were unearthed, he emerged from his coffin, alive, but mutated with the appearance of a desiccated, glowing corpse.[1]

Frye was stuck in a form of stasis and was forced to witness the experiment that transformed him over and over again.[2] Frye was later taken by General Fortean's U.S. Hulk Operations for research into gamma mutation. Though Frye suffered greatly from his mutation, Fortean didn't see a need to relieve him of his suffering.

Hulk Operations scientist Charlene McGowan experimented on Frye,[3] but she felt remorse and wanted to find a way to relieve his suffering.[4] After Bruce Banner took over Hulk Operations,[5] the organization's scientists went to work trying to cure Frye, but they didn't have any luck. To carry out his plan, the Leader used the Green Door to take control of Frye. He forced Frye to smash his hand through his glass container and killed a Hulk Operations scientist with his radioactivity before greeting Doc Samson. Samson eventually realized that the Leader had taken control of Frye. Leader then used Frye to kill Samson, forcing Samson's soul to travel to the Below-Place where the Leader was. Then, the Leader used Frye to spy on the situation that was unfolding.[6] Later, after Shadow Base was abandoned, Frye was forcibly merged with the head and torso of Rick Jones.[7]

Later, Frye and Rick used intense radiation to burrow through the ground until they reached the surface, exclaiming that they were free.[8] They were immediately attacked by Doc Samson in the body of Sasquatch out of the belief that they were still under the Leader's control and due to the fury from Sasquatch's body. Doc Samson eventually stopped when he realized that Frye and Rick weren't fighting back.[9]

Immortality: For all intents and purposes, like other Gamma mutates, Del Frye cannot permanently die. The exact nature of this ability is unknown; however, it is suggested that when he died, the Green Door opened and allowed him to "walk through" in order to successfully enable resurrection.[1]

Frye is a collegiate level athlete.[1]

Like this? Let us know!
Retrieved from "https://marvel.fandom.com/wiki/Delbert_Frye_(Earth-616)?oldid=6214316"
Community content is available under CC-BY-SA unless otherwise noted.