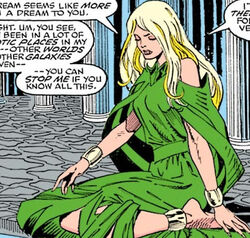 Delphi was the daughter of Andromeda and Jason the Renegade, both descendants of the immortal Agamemnon. Like her parents she was recruited into the Pantheon organization. She was recruited by Agamemnon and given her code name in reference to the ancient Greek city which housed a fortune-telling oracle. Delphi served the Pantheon by directing their efforts, rather than participating in the field.[1]

Delphi is a human/Asgardian hybrid, providing various advantages over other humans.

Like this? Let us know!
Retrieved from "https://marvel.fandom.com/wiki/Delphi_(Pantheon)_(Earth-616)?oldid=5973017"
Community content is available under CC-BY-SA unless otherwise noted.