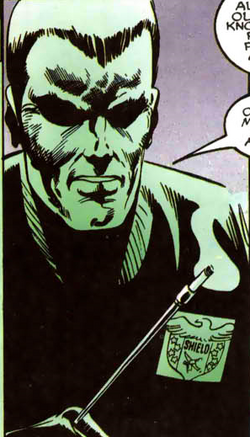 The Deltite was a Life-Model Decoy created by Nazi scientist Dr. Arnim Zola and based upon the mind of Baron Wolfgang von Strucker. They had Jake Fury smuggle the LMD inside of S.H.I.E.L.D. to wreck havoc at a later date.[3] The Deltite was unaware of its origins, and believed its actions were self-motivated.[4]

The Deltite determined that S.H.I.E.L.D. had compatible goals to maintain order with its own most basic programming. He eventually took control of the S.H.I.E.L.D. Executive Council by replacing all of its members with puppet LMDs. Through the personalities of Baron Strucker and Edwin Booth he was able to take control of both of Hydra and A.I.M.. He used the Tony Stark personality to manipulate the market, eventually taking control over Roxxon Oil.[4]

The Deltite turned the resources of S.H.I.E.L.D., A.I.M., Hydra, and Roxxon towards the creation of more-evolved LMDs, a new species in his image. After extensive testing, the Deltite devised the use of synthetic "Deltite" parasites to extract the personality templates of human beings in a process called "encoding". These Deltite LMDs possessed sentience and autonomy, the full range of emotions and personality traits of their templates, as well as physical superiority. However, they were inherently flawed and would burn out after a variable amount of time, aging rapidly to the point of death. Deltites could be re-encoded into new, healthy bodies, but each re-encoding cost them more of their template's humanity.

The Deltite wanted to ultimately extract the Infinity Formula from Nick Fury's blood to preserve his Deltite LMDs indefinitely once the personality encoding process was perfected. To continue his work, he created a sub-caste of LMDs called Encoders, imprinted with a religious doctrine where the Deltite was the creator and Nick Fury was the messiah who would one day bring eternal life onto them.[4]

Deltite had an Life-Model Decoy of Nick Fury attempt to claim the Iron Man Armor kept at Stane International. However, James Rhodes destroyed all of the armor to keep them out of S.H.I.E.L.D.'s hands.[5]

Now head of the S.H.I.E.L.D.'s Council, Deltite had Agent Roger Dooley, transport the She-Hulk to the Helicarrier for study. Fury went on vacation to protest the Council overruling his concerns. The Helicarrier was attacked by a group of Sentient cockroaches, who took over Dooley and caused it to crash.[2]

As the time of the Ascension Call drew near, the Deltite had replaced more than 20% of S.H.I.E.L.D. personnel with LMDs. He was forced to accelerate the time table when Nick Fury's secret sleeper agent inside Roxxon, Jack Rollins, uncovered evidence of Project: Delta. In his role as head of S.H.I.E.L.D.'s board of directors, the Deltite replaced Rollins with an LMD to deprive Fury of any evidence of Delta, and then painted the executive director as a traitor, turning S.H.I.E.L.D. against him.[6]

The Deltite arranged for Jasper Sitwell to become executive director and replaced him with an LMD as well. In the weeks that followed, the Deltite moved pawns across the world to recapture Fury and arrange for the Ascension Call of all Deltites back to the satellite.[7]

When Fury was captured and the time came, however, the Deltite ignored the doctrine he created and exposed himself to the encoding process with Fury while he was still alive. Shocked by the experience of touching a living human mind, the Deltite took Nick Fury aside and confessed his actions up till that point to better understand Fury and himself. When the Deltite's beloved overheard him cast aside his sacred doctrine, and several of Fury's allies led a revolt against the Encoders, the Deltite found himself besieged on all sides. He was mortally wounded in combat with Fury and then executed as a non-believer by his own creations.[4]

As a Life Model Decoy, the Deltite's body was physically superior to the average human. He also possessed great intelligence from his multiple personality templates working in unison with one another.

Like this? Let us know!
Retrieved from "https://marvel.fandom.com/wiki/Deltite_(Earth-616)?oldid=6081129"
Community content is available under CC-BY-SA unless otherwise noted.