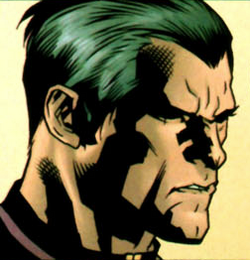 Demetrius Lazer began his 31-year career in the service of the United States military when he entered the U.S. Military Academy in West Point at the age of seventeen.

Lazer eventually graduated from West Point with honors, and began to serve his country well in a variety of positions. To which at some point obtaining the rank of General.

When the President of the United States decided to establish the Office of National Emergency in order to create an efficient response unit capable of dealing with the growing superhuman threats challenging the United States, General Demetrius Lazer was his first choice for the position of Director of O.N.E..

During the Decimation event, Lazer began to show his mutant-hating bigot ways, possibly due to the repeated humiliations by the X-Men and their enemies.[1] Thus Lazer utilized the voodoo mutant Johnny Dee to manipulate the 198 Mutants into a weapons bunker rigged to explode. Fortunately, Lazer's plan was foiled by Val Cooper and General Reyes. Furthermore whilst being interrogated Doctor Cooper, Johnny Dee snapped the neck of a voodoo doll of Lazer, thus ending his life.

Like this? Let us know!
Retrieved from "https://marvel.fandom.com/wiki/Demetrius_Lazer_(Earth-616)?oldid=6432633"
Community content is available under CC-BY-SA unless otherwise noted.