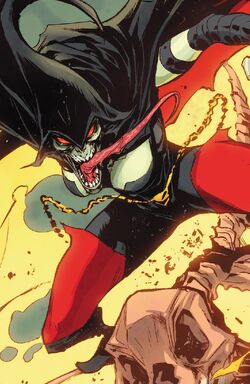 And now. The one who shall once again assume the path of righteousness. I will see you... all of your kind... and any who seek to protect you burn for all eternity in the fiery pit!

After losing fights with Spider-Man and the Green Goblin, Jason Philip Macendale Jr., aka the Hobgoblin, took advantage of the Inferno crisis by following several demons back to their lair and confronting their demonic lord, N'astirh. Macendale wanted enough power to defeat his enemies, and offered his soul to N'astirh in exchange for such power. When N'astirh stopped laughing, the demon lord decided that Macendale's effrontery was worth something even if his soul wasn't, and had him possessed.[3]

This gave Macendale the physical strength he craved, coupled with superhuman speed and endurance; unfortunately, the demon who possessed him proved to be incompatible, and the two fought many a battle for control of Macendale's physical form until the demon literally ripped away from its human host and began a separate existence as the Demogoblin.[4]

Demogoblin was a religious fanatic who had no interest in personal wealth or position. He was determined to destroy all sinners and thus gain redemption for himself. Since his definition of sinner was rather strict and exempted only children, he found himself in continual conflict with Spider-Man, Ghost Rider, Venom and even his former host, Macendale.[5][6]

His interest in purifying New York City caused him to join with Carnage and Co., although he deplored Carnage's lack of discipline.[7]

Later, on Halloween night, Demogoblin besieged the unholy Library of Rhan. In the midst of purging the cultists and exterminating their defenses, he was interrupted by a loud, high-pitched, ear-piercing scream. He disappeared in a flash of cosmic energy.[8] Demogoblin soon found himself sitting on a throne underneath a subway station in San Francisco, surrounded by little green goblins. They had summoned him here to be their chosen leader. Thus, Demogoblin led them on to Alcatraz Prison, where he crossed paths with Venom and Morbius.[9] As his two adversaries attacked him, he had been forced to retaliate with energy blasts and Pumpkin Bombs. One of the Bombs blew a section of the wall, exposing deadly sunlight to Morbius and the goblins; while it didn't kill Morbius, some of the goblins weren't so lucky. As Venom threw knocked him several yards out of the prison, Demogoblin managed to summon his glider and escape. Morbius and Venom nearly ruined his real plan: He viewed these goblins as no more than heretics, and so used them in order to locate the necklace used for the summoning. He found it in the possession of newly-elected Mayor Charles Palentine, the man who had planned this goblin invasion from the start. Snatching away the necklace from Palentine, Demogoblin ordered the goblins to send the sinner on his way to Hell; besides, a mere mortal had no real power over this talisman. He used the necklace's near godlike power to grow fifty feet tall, then led the goblins to the Golden Gate Bridge, where he ordered them all to dive into the bay and drown themselves. Satisfied, he tossed the necklace over the bridge, allowing it to dissolve; he was then returned to normal size. Just as Venom and Morbius came to thank Demogoblin for saving San Francisco, the maniac just laughed it off and traveled back to New York.[10]

Demogoblin eventually forgave Macendale, which annoyed the Hobgoblin so much that he decided to rid the world of his other half once and for all. The final battle took place in a church. When a pillar in the church started to give way and threaten a nearby child, Demogoblin held the pillar up long enough for the child to escape, but was crushed to death when his strength gave out.[11]

Demogoblin was resurrected by Carnage using Shriek's body as a vessel, having ripped out her spine to claim the remnants of the Scorn symbiote attached to her central nervous system. Renaming herself "Demagoblin", the revived demon initiated a romantic relationship with Carnage.[1] She and the symbiote-infected Man-Wolf were sent to hunt Misty Knight down and recaptured her, but not before she was able to radio for help.[12] Both she and Man-Wolf had a brief confrontation with the other heroes. When she was about to kill Misty Knight, Man-Wolf regained his senses, giving time form him and the other heroes to escape.[13]

The Cult of Saint D

Following Dark Carnage's death, Demagoblin began calling herself "Saint D" and took over an old church, recruiting homeless children into a cult based on her twisted version of Christianity. When a pair of elderly serial killers who had been preying on homeless children attempted to abduct one of her cultists, Demagoblin captured and killed them, leading to a confrontation with NYPD Detective Henley.[2]

Superhuman Strength: Demogoblin was superhumanly strong with physical strength roughly equal to Spider-Man's at the time, meaning he could lift about 10 tons.

Superhuman Speed: Demogoblin was capable of running and moving at speeds superior to that of the finest human athlete.

Superhuman Stamina: Demogoblin's musculature generated less fatigue toxins during physical activity than the musculature of a normal human. He could physically exert himself at peak capacity for several hours before the build up of fatigue toxins in his blood began to impair him.

Superhuman Agility: Demogoblin's agility balance, and bodily coordination were all enhanced to levels beyond the natural physical limits of even the finest human athlete.

Superhuman Reflexes: His reflexes were similarly enhanced and were superior to those of the finest human athlete.

Superhuman Durability: The tissues of Demogoblin's body were somewhat harder and more resistant to physical injury than those of an ordinary human. He could withstand impact and blunt trauma forces that would cripple or kill a human being with little to no discomfort. For instance, he could withstand falling from a height of several stories without being injured.

Claws & Fangs: The Demoboglin's fingers were tipped with extremely sharp claws and his mouth was filled with rows of needle-like, razor sharp teeth that he could use in close combat situations if he preferred.

Magic Manipulation: The Demogoblin's body was filled with unique mystical energies that he used to create equipment similar to that used by the Green Goblin and Hobgoblin. This equipment typically consisted of a skeletal Goblin Glider composed of Hellfire and Brimstone that he used to fly through the air at speeds of at least 90 miles per hour, equal to the gliders used by the Green Goblin and Hobgoblin. He could also generate mystical weapons similar to those of the Green Goblin and Hobgoblin such as razor bats and pumpkin bombs which could emotionally paralyze his victims. He could also use his magical powers in more typical ways in combat situations such as firing beams of intense heat from his hands, though he preferred to use his goblin weaponry.

Psionics: The Demogoblin also possessed limited telepathic capabilities that enabled him to track down and/or communicate with certain individuals such as the Hobgoblin and the Doppleganger.

After possesing Shriek´s body Demagoblin has all her mutant powers [13]:

The Demogoblin is well versed in arcane lore and in the practice of magic. Even though he had no formal training, his magical abilities coupled with his physical ones made him a formidable combatant.

Like this? Let us know!
Retrieved from "https://marvel.fandom.com/wiki/Demogoblin_(Earth-616)?oldid=6424786"
Community content is available under CC-BY-SA unless otherwise noted.