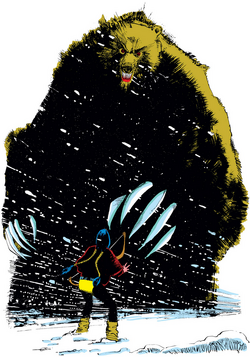 The Demon Bear was originally an entity who haunted the dreams of Danielle Moonstar, threatening that he would eventually come and kill her. He was seemingly responsible for the deaths of her parents, William and Peg Lonestar. At first, Dani assumed that the Demon Bear was just a nightmare brought on by Professor Xavier's possession by the Brood Queen when he gradually began attacking his students in an attempt to implant them with Brood embryos. It turned out that the Bear was neither a manifestation of her powers nor the Professor's mental control. Danielle kept the Demon Bear's presence in her dreams secret from her team, the New Mutants.[1]

The Demon Bear revealed his plan to destroy Danielle when he appeared to her as a phantom. After running various Danger Room scenarios, Moonstar felt confident in confronting the demon; however, he took advantage of her premature assumption that he was defeated, mauling her and severely damaging her spine.[2]

Upon discovering Dani (thanks to Wolfbane's telepathic link to Dani) out on the campus grounds, heinously mauled, the New Mutants rushed her to the Mid-County Medical Center. The Demon Bear was not through with Danielle, and he infiltrated the hospital, thinking to finish the job and possess Danielle's soul. He transported the team to the Badlands, presumably his dimension. There the New Mutants fought and defeated him, disrupting him with Magik's Soulsword, the ultimate expression of her black magic. During this skirmish, the Demon Bear had possessed Sharon Friedlander and Officer Tom Corsi and turned them into demonic Native American warriors under his control. They reverted back to normal humans, but still kept the appearance of Native Americans. Once Magik cleaved the bear in two with her sword, Danielle's parents, William and Peg, leaped out from his body; it turned out that they were not dead, merely enslaved.[3]

Another Demon Bear appeared after Eli Bard desecrated the corpses of Warpath's apache tribe. It was released by Warpath, with the help of the Ghost Rider.[4]

Like this? Let us know!
Retrieved from "https://marvel.fandom.com/wiki/Demon_Bear_(Earth-616)?oldid=6076137"
Community content is available under CC-BY-SA unless otherwise noted.