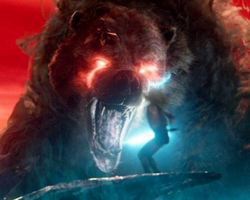 As a young girl, Dani Moonstar learned from her father a proverb about each person having two bears inside them, locked in combat beteen good and evil. When Dani's mutant powers first manifested, in her sleep she accidentially summoned the Demon Bear from her nightmares. The bear rampaged through her village and kille everyone, including Dani's father who manage to get her to run away.

When Dani and her fellow Milbury Hospital patients Roberto Da Costa, Sam Guthrie, Illyana Rasputin and Rahne Sinclair learned that Dr. Cecilia Reyes had been lying to them and that the Essex Corporation planned on using them as mutant killers, they confronted Reyes. She then trapped them inside force fields and began suffocating Dani, who instinctively conjured the Demon Bear again. The Bear killed Reyes and proceeded to hunt don her friends while Dani herself became non-responsive. Illyana use her powers to go through Limbo and together Lockheed confronted the creature. She jumped onto the Demon Bear, slicing him on his back, however the Bear ignored Illyana and turned his attention towards reaching Dani. Illyana and Lockheed chased Demon Bear to the chapel and attacked him again, this time with the help of Roberto and Sam. The Bear hit Illyana and she quickly teleported herself out of the chapel, after which it went after Rahne. After Dani got a hold of her powers in the spirit world, she woke up and ordered the Bear to stop. It obeyed her commands and she commanded him to leave, after which the Demon Bear dissipated.[1]

Like this? Let us know!
Retrieved from "https://marvel.fandom.com/wiki/Demon_Bear_(Earth-TRN414)?oldid=6108953"
Community content is available under CC-BY-SA unless otherwise noted.