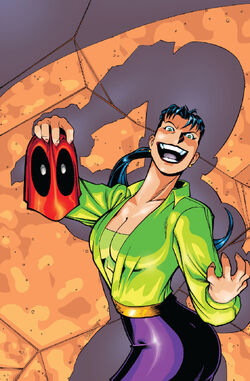 Nothing has yet been revealed about the origin of the woman known as the Vamp. She was secretly a member of the subversive criminal organization called the Corporation and was the lover of Senator Stivak, the head of Corporation-East, the division of the Corporation that dealt with operations in the eastern half of the United States. Corporation scientists, presumably through genetic manipulation, endowed the Vamp with the ability to transform herself into the Animus, a humanoid being with an enormous head, no female sexual characteristics (at least on the upper half of her body), and great psionic abilities. Senator Stivak himself triggered her transformations by remote control using a device in his possession.[1]

Aware that the Corporation employed agents with real or artificial superhuman abilities, the international law enforcement agency known as S.H.I.E.L.D. organized its own team of "super-agents" to combat them. Each of the S.H.I.E.L.D. Super-Agents had either actual superhuman powers, in the case of the Texas Twister, or artificial superhuman abilities, given them by special devices, such as Marvel Man and the Blue Streak. Two of the Super-Agents, the Blue Streak and the Vamp, were secretly double agents working for the Corporation. It is not known how the Corporation managed to place these two agents within S.H.I.E.L.D. undetected.[2]

Apparently the Vamp was chosen to become a S.H.I.E.L.D. Super-Agent due to her excellence in hand-to-hand combat. S.H.I.E.L.D. was unaware of her power to become the Animus. Instead, S.H.I.E.L.D. gave her an Absorbo-Belt which enabled her to duplicate within herself the powers and skills of another person within certain limits. S.H.I.E.L.D.'s Public Director Nick Fury wanted to give her the code name of Femme Force, but she chose the name Vamp instead.[2]

Captain America, Marvel Man, and the Vamp then went to Alcatraz Island in San Francisco Bay, where the Corporation was holding Captain America's ally the Falcon prisoner. Arriving, they found that the Corporation was also holding Bruce Banner captive. Captain America and Marvel Man were confronted by Stivak and Corporation-West leader Curtiss Jackson, and the Vamp revealed herself to be a Corporation agent. A battle ensued during which Marvel Man freed Banner, who transformed into the Hulk. Stivak then triggered the Vamp's transformation into the Animus, in which form she had enough power to battle the Hulk. But the Hulk smashed the crystalline club that stored most of Animus' psionic energies. The destruction of the club caused the Animus to revert back into the Vamp, who fell into a catatonic state as a result of mental shock of having the club smashed. Stivak was killed, Jackson escaped, and Captain America, Marvel Man, and the freed Falcon turned the Vamp over to S.H.I.E.L.D.[5]

It is not known exactly what happened to the Vamp then. Somehow she regained full consciousness and was convicted, but somehow regained her freedom. Presumably she no longer possessed the Absorbo-Belt, and it is unknown whether or not she could still become the Animus. She apparently became a free-lance professional criminal and operated for a time in the American Midwest. The Vamp was invited by Gary Gilbert, who had formerly been the costumed criminal known as Firebrand, to attend a meeting of costumed criminals to discuss possible strategies against the Scourge, a mysterious vigilante who was assassinating costumed criminals. The meeting was held at the Bar with No Name in Medina County, Ohio, which was one of many of similar secret meeting places for criminals. However, despite Gilbert's security precautions, Scourge showed up at the meeting disguised as the bartender and shot and killed the Vamp along with all of the other criminals present.[6]

Arnim Zola collected the remains of some of the criminals from the meeting in order to clone them; The Vamp's remains were among those collected. Zola allowed the Vamp's clone to continue to engage in criminal activities as if she had never died, in order to collect money for his future experiments. The Vamp clone was hired by one of Typhoid Mary's personalities to assassinate herself; this job brought her up against the hero known as Deadpool.[7] Later, Deadpool infiltrated Arnim Zola's lab and destroyed all the clones from the Bar with No Name, including the Vamp.[8]

The Vamp held a black belt in judo and was an excellent hand-to-hand combatant.

In her normal form the Vamp possessed the normal human strength of a woman of her age, height, and build who engaged in intensive regular exercise. Her Absorbo-Belt enabled her to increase her strength temporarily to an undefined extent by, duplicating another person's level of strength. As the Animus, the Vamp possessed superhuman strength of an unknown level that was greater than that which the Absorbo-Belt could give her.

Absorbo-Belt
As a S.H.I.E.L.D. Super-Agent the Vamp wore an absorbo-belt that, through unknown means, enabled her to duplicate within herself the physical strength and athletic skills of a person within a certain but unrevealed radius of herself for a brief period of time, the length of which has not been revealed. There is no evidence that the absorbo-belt could enable the Vamp to gain superhuman strength, other kinds of superhuman abilities, or non-physical abilities. It is known that the absorbo-belt could not duplicate the superhuman strength of the Hulk.

Like this? Let us know!
Retrieved from "https://marvel.fandom.com/wiki/Denise_Baranger_(Earth-616)?oldid=6477636"
Community content is available under CC-BY-SA unless otherwise noted.