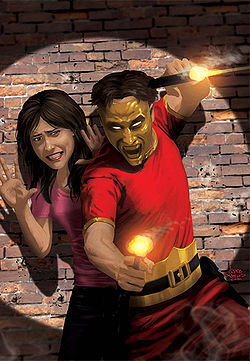 Dennis Burton was a young Assistant District Attorney from a long line of law enforcement officers. He grew frustrated at how difficult it is to first catch and then convict gangsters, and so he decided to take the law into his own hands. Using the alias "The Laughing Mask", he donned a red suit and phosphorescent glowing mask, plus a pair of .45 pistols. He accepted killing as a means for justice.[2]

In his first recorded appearance, he investigated a series of train wrecks which baffled the police. As the Laughing Mask, Dennis learned that it was the work of Lester Deeks, a crooked businessman hoping to drive the local railyard out of business so he could purchase the property. Laughing Mask murdered Deeks, killing most of his gang and stopping his latest attack on the rail yard. He left only one criminal alive to confess to the crimes.[1]

Shortly after this, Burton adopted the guise of the Purple Mask for a time. His reasoning for doing so remains unrevealed. When the millionaire Frederick Swaberts hid his fortune somewhere on his property before his death, crooks intended to steal it before his son could inherit it. With the mystery afoot, Benton decided to get involved as the Purple Mask. Attacking the crooks in the Swaberts estates, they uncovered the secret room where the fortune was hidden. Even in his new guise, Purple Mask was still not above killing, once more leaving only one criminal alive to confess to the plot.[3] In his last recorded appearance as Purple Mask, Burton investigated the robbery of a bank, learning that it was orchestrated by the owner Mr. Whalen. Purple Mask caused the crooks to crash their car while attempting to escape, leaving them for the authorities.[4]

By 1945, Burton resumed his Laughing Mask guise and eventually went from hunting mobsters to enlisting in the army and fighting in World War II. Working with Allied Forces, he battled the Nazis alongside other costumed heroes. After a successful raid on a Nazi missile factory, members of the Waffen S.S. were rounded up by the Dynamic Man and brought to Laughing Mask. Laughing Mask then executed them for the killing of American soldier Major-General Maurice Rose.[5]

Among the community of costumed heroes, Laughing Mask and other powerless heroes were referred to as "tourists" as they apparently were in it for fame and recognition. On April 25, 1945, the Laughing Mask joined Captain America, the Invaders, and a cadre of other superheroes in the Battle of Berlin. There, he joined Blue Blade, Black Widow, Captain Wonder, Dynamic Man, Fiery Mask, Rockman, Master Mind Excello, Mister E, Phantom Reporter, the Witness, and the telepathically controlled robot Electro in searching the headquarters of the SS for snipers. They ended up walking into a trap set by Nazi agents who wished to experiment one them. They were all gassed and placed in cryogenic suspension to be examined later. However, the Soviets soon invaded Germany and beat back the Nazis, with those involved with capturing the group of heroes being killed. Laughing Mask and the others were forgotten and spent decades in suspended animation.[6]

Their bodies were discovered in the 21st Century and were recovered by the United States Military who brought them back home and revived the heroes. The government offered them a chance to work with them as a group of government sponsored superheroes. Laughing Mask and the others all agreed to enter government service and were loosely dubbed the Twelve.[6]

Once set up in a government owned mansion, Laughing Mask asked what the catch was to them joining with a government and learned that they would be granted total immunity under the law and be allowed a year to acclimatize themselves to the 21st century.[7] One night, while drinking alone in the garage where the inert Electro robot was being kept, Laughing Mask had decided to he would show them what sort of hero he was and resume his vigilante activities as the Laughing Mask. That night, he broke up a liquor store robbery, beating the crooks into submission; however, he spared their lives and turned them over to the authorities. Although he was protected thanks to his government immunity, the police came to the mansion the following day, asking that Laughing Mask to turn over his firearms to be examined by the authorities. Laughing Mask agreed and turned them over to the police without question. That evening, Laughing Mask participated in a going away party for Mastermind Excello and commented on Phantom Reporter's pass on the Black Widow getting shot down.[8]

Burton's compliance with the authorities soon caused his past vigilante activities to come back to haunt him. While attempting the Phantom Reporter to team up with him as partners, they were visited by Lieutenant Detective Lew Goldman. Goldman informed Laughing Mask that examining the hero's guns linked him to various gangland deaths. As they were done before he was granted immunity and there being no statute of limitations on murder, Laughing Mask was then arrested and taken into police custody.[9] Burton was formally booked, processed, and then placed in a prison until his trial.[10] Burton's prison stay was short however, when Mastermind Excello detected that the group would be experiencing a turning point and that one of them was destined to die. In order to gather the group together to discuss this, Excello paid to have Laughing Mask bailed out of prison.[11]

He was gathered with the others on the evening Blue Blade was murdered[12] and was present when Phantom Reporter revealed a series of recent murders, and Blue Blade's death were all caused by the Dynamic Man who was remote controlling the Electro robot.[13] He narrowly avoided being crushed alive when Dynamic Man destroyed their mansion and was later at the funeral for the Fiery Mask who was killed in the final battle with Dynamic Man.[14]

After Dynamic Man's destruction, Laughing Mask and the others surviving members of the Twelve were all relocated to a military base. There, he was cut a deal with the authorities: If he would control the Electro robot for the government, they would commute his sentence to time served while in suspended animation and the rest of his sentence on probation working with the government. Laughing Mask took up the offer and was last seen controlling the Electro robot on a mission in the Middle East.[15]

Like this? Let us know!
Retrieved from "https://marvel.fandom.com/wiki/Dennis_Burton_(Earth-616)?oldid=5722450"
Community content is available under CC-BY-SA unless otherwise noted.