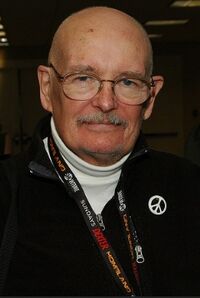 Denny O'Neil was an writer/editor for Marvel Comics. His 2nd stint at Marvel Comics (1980-86) saw some of the most important works done for titles such as The Amazing Spider-Man, Daredevil and most importantly Iron Man. He bridged the gap twice, once for David Michelinie and Bob Layton for their run on Iron Man and the other time for Frank Miller by taking over Daredevil (issues 194-218).

He and Frank Miller teamed up for Amazing Spider-Man Annual Vol 1 14 & 15 while he and John Romita Jr. (Earth-1218) introduced Madame Web and Hydro-Man to the Spider-verse.

His Iron Monger saga (issues 163-200) was adapted for 2008 Iron Man (film) and during his run on the title, it was he who replaced Tony Stark with James Rhodes who would take up the mantle of Iron Man.


Retrieved from "https://marvel.fandom.com/wiki/Dennis_O%27Neil_(Earth-1218)?oldid=4768198"
Community content is available under CC-BY-SA unless otherwise noted.