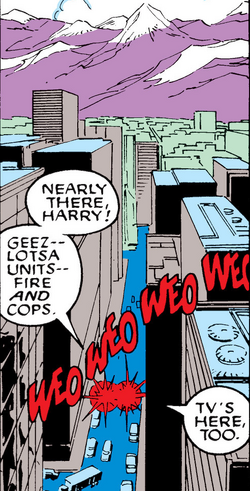 Denver is the capital of the U.S. State of Colorado.

After winning for the third year in a row the automatic weapons competition at the Soldier of Fortune Annual Convention, Brendon Doyle was visited at his lodge by Iron Man, who claimed his highly sophisticated suit of body armor.[1] A few days later, Jim Rhodes, disguised as Electro, was arrested by the Guardsmen, just to get into the Vault.[2]

A paramedic, Harry Palmer, was infected by the Brood while on a camping trip[3]. He spread the infection to his co-workers and any mutants that he happened to come across, until the X-Men came along and took care of the issue.[4]

Years after, during the nationwide Skrullian witch hunt, an African-American teacher and his students were rescued by the Scarlet Witch and Hawkeye.[5]

A short time later, the Thunderbolts saved construction workers from a fire.[6]

Like this? Let us know!
Retrieved from "https://marvel.fandom.com/wiki/Denver?oldid=5838544"
Community content is available under CC-BY-SA unless otherwise noted.