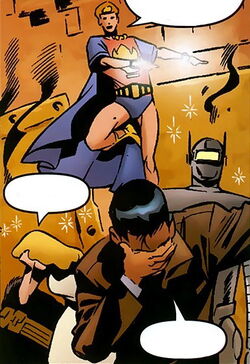 In the late 1950's, President Eisenhower was kidnapped by Golden Claw. The U.S. Government let FBI Special Agent Jimmy Woo forge a special rescue team of unlikely heroes.Woo reviewed his files on active super-beings and instinctively selected a roster that came to him in a dream: Gorilla Man, Venus, Marvel Boy and aquatic heroine Namora. Namora declined to join the mission but found a replacement by helping Woo salvage the lost Human Robot.[1]

Meshing smoothly as a team, Woo's "Department Zero" rescued Eisenhower and accomplished various other missions, repeatedly clashing with Atlas Foundation agents and pawns such as the mutated canine cosmonaut Laika; however, U.S. authorities ultimately decided the world was not ready for such bizarre heroes and disbanded the group, declaring their missions classified and records of their activities sealed.[1]

Members of this group would later go on to re-form as the Agents of Atlas.[1]

Like this? Let us know!
Retrieved from "https://marvel.fandom.com/wiki/Department_Zero_(Earth-616)?oldid=6541681"
Community content is available under CC-BY-SA unless otherwise noted.