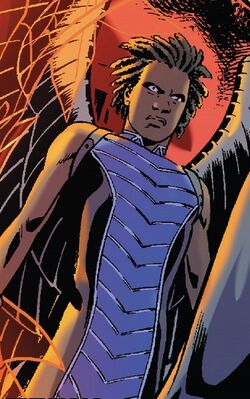 After the death of their father in the line of duty, Derek's brother was left with the responsibility of taking care of him. While Joe became a police officer like their father, Derek decided to doll out justice in his own way. Derek began using his mutant power in a vigilante style, and besides protecting people he was robbing burglars, so his brother became suspicious of how he was able to pay his share of the rent and still be unemployed. One night while his brother was on patrol, Derek stopped a mugger but was just close enough to be seen by Joe's partner. Though she could not identify Derek, she now knew that the angelic vigilante was a mutant and not a celestial figure.

The authorities ordered to capture this winged vigilante by any means, so Joe went out on patrol. Derek swooped down and picked up his brother and then revealed his identity to his brother while flying above the Hudson River. When Derek refused to allow himself to be arrested on the sole fact that he is a mutant, Joe fired his gun at his brother and then both fell in the water. Derek was saved by Jimmy Hudson and Karen Grant, while his brother was rescued by the police. He decided to leave with the duo, while Karen Grant deleted his brother's memory of what happened and made him believe he got a job at Cincinnati and left home.

The Final Incursion and New Marauders

In the middle of the final occurrence of a cosmic phenomenon known as an incursion, which caused the collision between the Earth and that of an alternate reality named Earth-616, Guardian and a group of mutants, namely Jimmy Hudson, Mach Two, Quicksilver and Armor, fell from their reality into Earth-616. When the Multiverse was eventually rebuilt, Guardian and these mutants became stranded in the Prime Earth, suffering from amnesia as a by-product of their transition from one reality to another.

Derek and the other foreign mutants were abducted by super-villain geneticist Miss Sinister, who brainwashed and turned them into her personal enforcers, the New Marauders. When Jimmy Hudson's natural resistance to telepathy allowed him to break free from Ms. Sinister's control and he went rogue,[1] the New Marauders were deployed to retrieve him. In the process, they confronted the young X-Men, who had tracked down Jimmy after he was detected by Cerebro.[2] Following a brief confrontation against the X-Men and Jimmy, during which Marvel Girl learned of Miss Sinister's involvement, the New Marauders were ordered by their superior to leave.[1]

The New Marauders remained by Miss Sinister's side as she allied herself with Havok, Emma Frost and Bastion to release Mothervine globally with the intent to make mutantkind the dominant species.[3] They were sent to recruit Xorn to Havok's cause, but two of the young X-Men, Jimmy Hudson and Bloodstorm, inteverened and rescued him.[4] Shortly afterwards, the New Marauders were sent to attack Magneto, who had threatened Havok's plans.[5] Magneto evaded them and escaped using his time platform.[6] Following the capture of the young X-Men, Emma Frost finally rejected Miss Sinister's ideals, and took psychic control of the New Marauders and turned them upon their mistress. However, Miss Sinister activated a kill-switch she had implanted in their genetic code, killing all three instantly.[7]

Like this? Let us know!
Retrieved from "https://marvel.fandom.com/wiki/Derek_Morgan_(Earth-1610)?oldid=5684892"
Community content is available under CC-BY-SA unless otherwise noted.