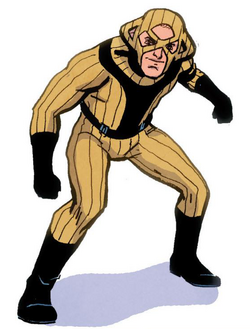 Desmond Charne was a holographic technician who always wanted to become a costumed criminal. He and his gang began robbing weddings including that of Betty Brant and Ned Leeds He attacked the party to rob all the guests of their valuables. Peter Parker managed to slip away, by snapping off the lights with a strand of webbing from one of his web-shooters, and switch to Spider-Man. After a lengthy battle, Spider-Man is finally able to defeat the Mirage by dropping a chandelier on him.[2][3]

Mirage also tried to attack the Thing when he was in Hospital but was defeated by Daredevil.[4]

He later went to a meeting of costumed criminals at the Bar with no name, where he spoke with Letha of the Grapplers.[5] Scourge was disguised as Jake the Bartender and killed Mirage along with all the other costumed criminals there.[6][7]

Arnim Zola created proto-husk version of Mirage, but it was killed by Deadpool.[8]

Charne was one of the eighteen dead villains resurrected by the Hood in order to kill the Punisher.[9] Charne's powers of illusion were also enhanced. Lascivious demonstrated her new emotion based powers on him, making him lick her boots.[10] Charne disguised himself and a number of the criminals as the Avengers were out to kill the Punisher. The Punisher uncovered the ruse when he knocked out Charne disguised as Captain America and captures him. He interrogated Charne about the Hood's plans, and left him with a grenade in his mouth. Mirage escapes and Letha removed the grenade in time. Letha ordered Bird-Man to him away.[1] Charne was tracked by the Punisher to a nightclub where he interrogated about Microchip's whereabouts, but Charne was shot by the female assassin.[11] He actually survived and spent some months in a coma before awakening.[12]

Mirage later attended a support group called Supervillains Anonymous that was held at a church and also attended by Boomerang, Hippo, Porcupine, Dr. Bong, Looter, Grizzly, and others.[13]

Mirage was recruited into the Owl's Sinister Sixteen. The group was assembled to distract the Chameleon's forces while Boomerang stole from him. During the battle between the group and the Chameleon's men, Mirage is knocked out and impersonated by the Chameleon who is in turn knocked out by Boomerang when he sees through the ruse.[14] Charne was pushed off a roof by Boomerang after foolishly agreeing to help him steal a painting.[15]

Mirage died from his fall, but was later brought back to life by the Jackal, and became one of his employees at New U Technologies.[16] Mirage then died from clone degeneration,[17] only to be brought back to Earth despite still being deceased when Doctor Strange restored Las Vegas.[18]

Like this? Let us know!
Retrieved from "https://marvel.fandom.com/wiki/Desmond_Charne_(Earth-616)?oldid=6477638"
Community content is available under CC-BY-SA unless otherwise noted.