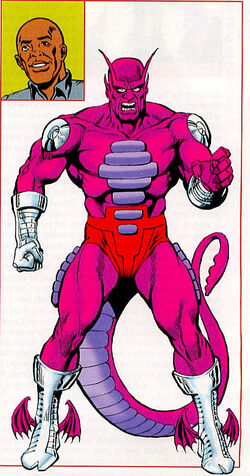 Desmond Pitt was in the army with Benjamin Grimm and after they mustered out they both became test pilots. The two were close friends and Pitt saved Grimm's life by rescuing him from the wreckage of a burning aircraft. After leaving the army he got married and had a son.[1]

After later re-enlisting he began work for NASA, researching shuttles for solar energy. Here Pitt discovered several Latverian agents of Doctor Doom had infiltrated the program. He decided to infiltrate them in turn but told no one of his true intentions, not even his family or superiors.[1]

Pitt performed so well at his self appointed task that he was taken to meet Dr Doom himself. However at this time his wife died and he became careless and was discovered as a double agent and seemingly executed. It seemed to the military that Pitt was a traitor and deceased so his son was placed in an orphanage.[1]

Instead of killing Pitt, Doom broke every bone in the man's body and reset them using the mystical element Promethium[citation needed] while also undergoing chemical and cybernetic alterations turning him into Darkoth, the Death Demon, a creature of Latverian folklore. He also used the newly developed Vibration Bomb to alter his memory and make Pitt actually believe he was Darkoth.[2]

Doom kept Darkoth in stasis but unleashed him when he learnt the Thing and Alicia Masters were in the Balkans in order to hopefully restore her eyesight. The pair fought, each unknowing of there friendship, with Darkoth able to hold out against the Thing until fleeing. The pair then met up and fought in the hospital and in the battle fell into subterranean caverns beneath which was one of Doom's Lairs. The Thing eventually got the upper hand but passed out from poison shortly after. Doom placed both in Neutro-Chambers and travelled to New York to confront Mister Fantastic and Medusa, in order to unleash the Vibration-Bomb and brainwash the masses. When Darkoth was freed from his restraints he went berserk but was calmed by Doom who revealed the man's true origins to him. Turning against his old master he freed the three Fantastic Four and joined them in stopping Doom from launching the Bomb. The group were attacked by Doom's robot The Seeker but they defeated it and Darkoth used the robots body to sneak into Doom's base, freeing the Human Torch. However they were too late to stop the launch. Doom, now outnumbered, fled with Darkoth in tow, where the pair fought and crashed into the bomb, seemingly killing Darkoth in the process.[3]

Darkoth survived in orbit in suspended animation for a short time before crashing near a Native American reservation in Texas. Here he was found by Diablo who nursed him back to health and gave him new powers. Diablo also convinced him to join up in order to seek revenge against Doom, unaware that Diablo's potions were slowly subjugating him to the point he couldn't talk about his life as Desmond Pitt. Meanwhile, the Thing had been chosen as Pitt's replacement on the sabotaged solar shuttle program. Darkoth learned about this and travelled to the base to try and stop him, but found himself unable to resist the will of Diablo so the pair fought. Darkoth eventually fled and tried to contact him by phone as Desmond, but the Thing did not believe him since he was believed Pitt dead and unaware that Darkoth was Pitt. The shuttle launched and the energy it was collecting was diverted by Diablo to his own energy converters, but Darkoth managed to shut it down before it drained all power. This caused the shuttle to crash to Earth, where the Thing survived and attacked Darkoth who went to investigate, having finally managed to free himself from Diablo's will but would soon die without the potions. Finally convincing the Thing of who he was, the pair went back to Diablo's base, causing a massive explosion which seemingly killed Darkoth.[4]

Pitt's soul however, was snatched by Mephisto before it reached its true destination. Mephisto, who was jealous of Thor's prior victory over him, called upon Darkoth (Pitt) to take the soul of Donald Blake (Thor's alter-ego) in return for his own soul. Pitt agreed, but only so he could return to his son, who was in an orphanage at the time. When Darkoth confronted a sleeping Blake he found himself unable to kill an innocent man and refused to do so. Mephisto intervened and forced Pitt to fight Thor for Blake's soul. Thor was victorious and even managed to free Darkoth from Mephisto's grasp by purging him of evil with his lighting and sending him to the afterlife. Afterwards, Donald Blake arranged for Pitt's son to be adopted by his new secretary and her husband.[5]

Darkoth found himself magically reborn in Otherplace, Promethium's home dimension, his appearance drastically altered. Here he lived for years until Dr Doom arrived in an attempt to convert the entire world into Promethium, followed by The Avengers and Excalibur. Unable to control Darkoth like the rest of the demons and not recognising, the pair fought during which time Doom destroyed the Otherplace's heart with the Soulsword. Doom fled to await the destruction of the Otherplace and S'ym attempted to get the Soulsword from Darkoth but was consumed by him. Darkoth contemplated killing himself with the Soulsword to stop Dooms plan as it would destroy all the Promethium, however he was stopped by Meggan Puceanu who convinced him he had purpose. The heroes left, leaving Darkoth the sole inhabitant of the Otherplace.[6] Not long after Shrill attempted to claim the sword but failed.[7]

Though the Otherplace was eventually restored, Darkoth's fate remains unknown.

Darkoth was a cybernetic organism further mutated through chemical means. As a result, he possessed a variety of superhuman abilities.

Superhuman Speed: Darkoth was capable of running and moving at speeds superior to that of the finest human athlete. He could reach a top speed of about 60 miles per hour.

Superhuman Stamina: Aside from being superhumanly strong, Darkoth's chemically enhanced musculature produced considerably less fatigue toxins during physical activities than the musculature of normal humans. He could physically exert himself at peak capacity for about 24 hours before the build up of fatigue toxins in his blood began to impair him.

Superhuman Agility: Darkoth's agility, balance, and bodily coordination were enhanced to levels that were beyond the natural physical limits of even the finest human athlete.

Superhuman Reflexes: Darkoth's reflexes were similarly enhanced and were superior to those of the finest human athlete.

Superhuman Durability: Due to a combination of cybernetics and chemical mutation, Darkoth's body was considerably resistant to physical injury. Darkoth's thick purple hide could withstand the impact of high caliber bullets, artillery cannon shells, and exposure to temperature extremes, such those generated by re-entering Earth's atmosphere, without sustaining injury. Darkoth's bones had been replaced with an highly durable Promethium steel alloy. Much like his skin and musculature, Darkoth's cybernetic skeleton could withstand powerful impact forces and exposure to temperature and pressure extremes without sustaining damage.

Flight: Attached to each of Darkoth's feet was a single pair of small, bat-like wings that allowed him to fly slowly through the air for brief distances.

Firehorns: Darkoth had two antennae on his head referred to as firehorns that had a few unique attributes. Through some unknown means, the firehorns fed on the mental energies of Darkoth's opponents at a maximum range of about 50 feet. The firehorns were also capable, when fully charged with energy, of emitting beams of intense heat capable of burning through several tons of ordinary steel within a matter of seconds. Lastly, the firehorns could fire heatless rays of concussive force powerful enough to knock down the Thing, and stun him.

Wallcrossing: Diablo provided Darkoth with the alchemical means to walk through solid walls during their collaboration.[8]

Darkoth was a highly skilled pilot, due to his years of training and experience as a pilot for the United States Air Force. Darkoth was also a formidable hand to hand combatant, also mostly due to his time spent in the military.

Like this? Let us know!
Retrieved from "https://marvel.fandom.com/wiki/Desmond_Pitt_(Earth-616)?oldid=5850198"
Community content is available under CC-BY-SA unless otherwise noted.