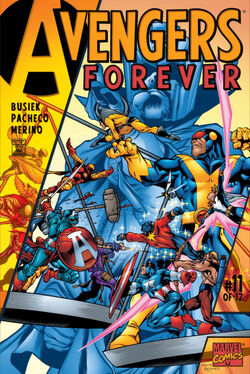 Immortus discovered that the root of this dark future was that of long time Avengers ally Rick Jones whose Destiny Force powers were beginning to resurface. Immortus decided to solve this problem by slaying Jones. At that time, Jones was left on the Blue Area of the Moon by the Avengers to be examined by the Supreme Intelligence of the Kree Empire. Immortus initially sent his agent Tempus to eliminate the boy, but he found opposition from the Intelligence, Libra, and his own past self Kang the Conqueror -- who was trying once again to thwart his destiny of becoming Immortus. Immortus responded in kind by sending a massive army of warriors from different eras to try and kill the boy. Jones himself managed to fight by using his Destiny Force powers to summon a group of Avengers from various times, including Captain America from the past, two versions of Henry Pym (Yellowjacket from the past and Giant Man from the present), the Wasp from the present, Hawkeye from the past, and Captain Marvel and Songbird from the future.[3]

Immortus was forced to retreat when the Avengers were able to fight off his army and Jones accessed the full power of the Destiny Force. Immortus then decided to attempt another angle to strike and attacked Kang's home realm of Chronopolis.[4] The Avengers were there as well, but they failed to stop Immortus from slaying Terminatrix and the Anachronauts. Kang forces the heroes and Jones to flee into the timestream while he stayed behind to face Immortus and his forces. Immortus eventually captured the Heart of Forever and use it to convert all of Chronopolis into the Forever Crystal, a powerful chronal device that allowed Immortus the ability to wipe out entire universes and prune the timeline according to the will of his masters.[5]

The Avengers escape the destruction of Chronopolis using Kang's replica Sphinx time-machine. The two Hank Pyms were able to determine that the time-machine dashboard was detecting three "chronal anomalies." Surmising these as potential hot spots of Immortus' activities, the Avengers break off into mini-squads. Utilizing Kang's smaller Chronosphere modules, they investigated with a sense of the "upper hand", believing Immortus didn't suspect them. Staying behind and out of reach, Rick reluctantly becomes "home base".[6]

The first step Immortus took was to complete the final deception in his original plan to manipulate the Vision and the Scarlet Witch. He traveled back in time following the battle between the original Human Torch and his modern day counterpart. He then used the Forever Crystal to split the timestream, creating two versions of the Torch. One was taken by the robot Ultron to be transformed into the Vision and the other taken by the Mad Thinker who used the Torch's corpse to capture and enslave his partner Toro. This was to prevent Scarlet Witch, a Nexus being, from having children that could possibly become powerful enough to threaten the timestream.[2]

Immortus next traveled to the 1950s of Earth-9904 a reality that was on the brink of invasion by the alien Skrulls, who had one of their agents posing as Richard Nixon. A mini-squad consisting of Wasp and Captain Marvel followed Immortus to that era leading to a clash with that realities version of the Avengers.[6] However, after a brief clash, the heroes agreed to work together to stop Immortus. Immortus reveals the Skrull spy's deception and obliterates the reality with the Forever Crystal. Only the Wasp and Captain Marvel managed to escape back into the timestream.[7]

Another mini-squad consisting of Giant Man and Captain America went to Earth-9930, which was set in the first half of the 21st-century. Arriving in war-torn Manhattan, Cap swiftly lends aid to the people on the street fending off an alien invasion. Cap and Giant Man soon meet up with the Avengers of that world being led by an aging Black Panther.[6] Giant-Man and Captain America fight alongside the Avengers against the overwhelming alien invasion.[7] After forcing the invaders to retreat, the heroes travel to Wakanda to use its vibranium to build a small fleet of attack ships to take the fight against the Martians to Mars itself. After a brief fight with Mourning Prey and numerous insectoid children, the vibranium is obtained. Cap and Giant Man later returned to the timestream.[8]

The last mini-squad consisting of Hawkeye, Songbird, and Yellowjacket arrived in Arizona during the year 1873 on Earth-616. Disguised in clothing of the era, the trio head into town to find what appeared to be Kang The Conqueror harassing Old West gun-fighting heroes Rawhide Kid, Kid Colt, and Two-Gun Kid. Through some quick realization, Songbird removes her party from the scene, clarifying that they are witnessing a previous Avengers adventure.[1] Rationalizing that the scenario will be resolved through its natural course of events, they return to the nearby cave where the Chronosphere is stashed only to find it missing.[6] Suddenly, a cackling hologram of the alternate Kang actively contending in this era taunts the heroes, detonating an explosive collapse of the cavern. Using her solid-sound powers, Songbird saves her teammates. They quickly get the attention of a trio of horse-backed gunfighters appearing to be the Black Rider and the Gunhawks: Reno Jones and Kid Cassidy. The gunfighters later turn out to be Immortus' Space Phantoms in disguise.[7] After defeating the Space Phantoms, the three heroes decide to go back into Tombstone to get their Chronosphere back. The trio stumble upon a battle between Two-Gun Kid and Kid's assembled group of costumed gunmen against Kang. Kid would later be helped by another group of Avengers.[1] The heroes get their Chronosphere back despite a Space Phantom trying to thwart them by disguising himself as Songbird.[8]

The regrouped Avengers then attacked Immortus after he returned to Limbo. He held them at bay with tormenting visions. But one member of the group -- Yellowjacket -- learning that he was destined to become Giant Man and offered to help betray his comrades in exchange for Immortus changing history so that he remained Yellowjacket forever.[9] Planting bugs from Limbo on his comrades, Yellowjacket was able to lead Immortus directly to the point in the timestream they were hiding out. Although Immortus managed to incapacitate the team, his actual target -- Rick Jones -- was nowhere to be found.[2]

Meanwhile, Kang had survived the destruction of Chronopolis, escaping to a hideout hidden in the realm he called "Purgatory". There he reflected on his past life up to that point before he was contacted by Rick Jones and the Supreme Intelligence and informed that the Avengers were captured and that the Time-Keepers were preparing to make their final gambit.[10]

Meanwhile, Immortus transports the Avengers to the future of Earth-9812 to see the future that the Time-Keepers were trying to stop where the Avengers have become an intergalactic empire, the future the Time-Keepers were seeking to avoid. The Avengers were captured by the Theta-4 division of the Galactic Avenger Battalion. The Battalion's leader and descendant of Richard Jones, Jonz Rickard, foiled Hawkeye's escape attempt by using his control of the Destiny Force. Rickard, believing the Avengers to be heretics for using what he thought was a duplicate of Captain America's legendary shield, fitted them with inhibitor collars and threw them into a cell for them to await execution. Fortunately, the Avengers were freed by Yellowjacket, who was temporarily allied with Immortus, and were led back to Limbo. However, the Avengers were then captured by the Time-Keepers and taken back to Earth-9812 to be placed on a mock trail for allegedly causing the dark future of Earth-9812. During the mock trial, the Time-Keepers explained all their manipulations they ordered Immortus perform over the years to the Avengers. Appalled by this, Yellowjacket realized that he was making a deal with the devil, freed his fellow Avengers, and he and they fought back against Immortus and the Keepers. They were soon joined by Rick Jones who came with Libra, the Supreme Intelligence, and Kang.[11]

By this time, the Time-Keepers had had enough and retreated back to their native era at the end of time on Earth-794282 where they intended to use the Forever Crystal to power a massive Chrono-Cannon to wipe out the planet Earth and the human race from history. When Immortus refused to hand over the Forever Crystal, the Time-Keepers slew him on the spot and took the crystal. The Avengers arrived to stop them, and in order to hold back their attackers, the Time-Keepers summoned an army of evil Avengers to fight off the heroes. During the struggle, the Time-Keepers also attempted to speed up Kang's destiny to turn him into Immortus. However, the Avengers fought back when Rick Jones and his Earth-98120 counterpart combined their Destiny Force powers to summon an army of good Avengers to help in the battle.[12]

Through sheer sense of will, Kang managed to fight off the Time-Keepers' attempts to force his transformation into Immortus. In the end, the Avengers triumphed, destroying the Chrono-Cannon, and Kang executed the Time-Keepers in retaliation. However, before he could get a hold of the Forever Crystal, Captain America smashed it despite the temptation to use it to change many of his personal tragedies. Kang was also in for another shock when he found Immortus, now a separate entity from him alive and well. When it was deduced that Kang's destiny was no longer tied to that of Immortus, the conqueror realized that he had achieved the greatest victory of all and teleported away. The Avengers were also returned to their respective eras.[13]