The Detroit Steel app was developed by Hammer Industries so to have real people control their drones while making them believe they were simply playing a video game. Justine Hammer first tested the app by having her daughter Sasha hold a meeting with a group of unsuspecting beta testers. For this run, the app was only used to fly the drones around and crash them into targets placed in a desert to test accuracy.[1] A second small test was run when the app went live.[2]

The app was first used for its purpose during the demonstration of Stark Resilient's repulsor car, with a swarm of drones being used to attack the race track in Seattle where it took place.[3] Iron Man and War Machine worked out on taking down the drones, drawing fire and providing cover while Rescue provided assistance on evacuation.[4] Iron Man lured the drones on a chase while Stark Resilient tried to hack into the regional cell-networks.[5] Hammer's plan was foiled before expected, as Maria Hill intervened and used her authority to shut down all cellular communication in the area.[5] 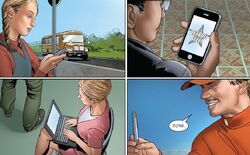 This program presented itself as a simple real-time strategy video game with the premise that its user controlled a Wingman Drone to help Detroit Steel in his missions. The players had the objective to eliminate whichever targets were displayed on the screen. The app used the accelerometer of the user's device for the controls. The player controlled the drone's targeting by moving a reticle around the screen. Once the target reticle lighted up, tapping the screen enabled to open fire. Ammo levels and gun heat levels were displayed in the status at the bottom of the screen.[1]

For the most part, this was the case. Out of the app's concurrent players, a fraction was used to control whichever amount of Wingman Drones Hammer Industries wanted to deploy. These players selected randomly received real-time streaming battlefield data and became Destroit Steel's air support in real life. If any of the users got knocked offline, another random user would connect. The process was totally anonymous and untraceable.[2]

Retrieved from "https://marvel.fandom.com/wiki/Detroit_Steel_App?oldid=4563635"
Community content is available under CC-BY-SA unless otherwise noted.