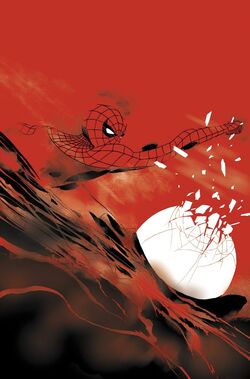 Devil's Breath was a powerful poison capable of killing anyone in the lineage of a specific DNA. Its formula was written down in the Tablet of Death and Entropy, an artifact sister to the Tablet of Life and Time. The tablet was acquired by mob boss Mister Negative as part of his plan to cripple the Maggia. He lured Maggia black sheep Bruno Karnelli, who belonged to both of the Karnelli and the Manfredi families, with the promise to ensure he reached the top of the organization, and extracted his blood to brew a batch of Devil's Breath encoded to both sides of his family.

After being saved from Mister Negative by Spider-Man, Karnelli realized that for leadership of the Maggia to fall on him, all other would-be successors would have to be dead, and alerted the hero about a Maggia gathering taking place at the Vandemere Hotel. Spider-Man disrupted the meeting and attempted to warn the Maggia, but Mister Negative and his Inner Demons released Devil's Breath through the building's ventilation system,[2] killing all the gangsters save for Carmine Karnelli, whom Spider-Man surmised was adopted after deducing the properties of Devil's Breath. Carmine urged Spider-Man to save the wives and children of the Maggia, who had been sent off to a circus in Battery Park. Spider-Man interrupted the function, but was confronted by the Inner Demons. His spider-sense warned Spider-Man of the location of the delivery system canister for Devil's Breath, and with seconds left before its detonation, he managed to hurl it to the other side of the tent, giving the Maggia members enough time to leave the circus before the poison dispersed. Mister Negative held one of the kids hostage, and forced Spider-Man to use a syringe to extract a sample of his own blood. The villain threatened to use the last of the rare and costly ingredients for Devil's Breath at his disposal to make one last dose encoded to Spider-Man's DNA if the hero interfered again in his plans.[3]

When the Maggia became in danger of being overrun by Mister Negative, their heads enlisted Mysterio's help in creating a robot replica of legendary Maggia boss Silvermane to rally their troops. As he prepared to confront Silvermane, Mister Negative brewed a batch of Devil's Breath using half of the vial of Spider-Man's blood to keep him from interfering. When he attacked Mysterio's base at the Empyrean Opera House and Spider-Man was present, Mister Negative released the gas to dispatch Spider-Man, but the hero managed to hold his breath long enough to escape, and then used a hazmat breather provided by NYPD officer Carlie Cooper to return to the scene and confront Mysterio.[4] Afterwards, Spider-Man enlisted the help of Black Cat to infiltrate Mister Negative's base and retrieve the remaining of his blood sample.

During his operation with the Maggia, Mysterio had orchestrated the apparent revival of several dead police officers, which coincided with the return of Carlie's father Ray Cooper. In order to determine whether Ray was her real father or an impostor, Carlie released knock-out gas on him while wearing a gas mask herself and pretended it was Devil's Breath coded to her DNA, using his reaction as a gauge. During clean-up at the Empyrean Opera House, Carlie had also managed to get a sample of the actual Devil's Breath and she intended to analyze it to figure out its pre-coded formula.[5]

Devil's Breath is a red-colored airborne toxin that requires rare and costly ingredients to produce. Using a blood sample from a given person, a batch of Devil's Breath can be encoded to their DNA, making the gas exclusively toxic for people in their lineage, but remains completely harmless to anybody else. Devil's Breath takes effect on its intended victim by means of inhalation, and it causes their body to dry up in a matter of seconds. Before release, Devil's Breath is stored liquefied.[3]

In this reality, the history of this substance is largely shrouded in shadow, having been a confidential research experiment conducted by Norman Osborn. Norman accidentally created what would later become a virulent bioweapon while searching for a universal cure to genetic diseases to help cure his wife Emily of the genetic disease that eventually led to her death.

The substance, tagged GR-27 but nicknamed Devil's Breath by the lab technicians helming the research, was initially tested on a young Martin Li, and with disastrous consequences; the chemical gave Li volatile powers which led to the death of his parents when he accidentally killed them during the testing. The substance was later demonstrated to have even worse effects on the general public, where it acted as a viral agent. When infected by Devil's Breath, victims would exhibit progressively worsening symptoms, ranging from a bad cold or flu to hemorrhaging and ultimately, death.

The substance was locked away for a long time, but was later revealed to be the object of desire of a vengeful Martin Li, now operating under the moniker Mister Negative and using his powers to bring ruin to the city Norman had helped develop. Li obtained the substance when it was being transferred to a safe house, but it was later stolen back by Doctor Octopus and dispersed throughout the city, effectively destroying the only quantity of it but infecting several hundred thousand.

The substance ultimately led to the deaths of several New Yorkers, including Peter Parker's Aunt May. It was later destroyed completely when a cure was developed and replicated to stop the spread and cure the infected.[1]

Retrieved from "https://marvel.fandom.com/wiki/Devil%27s_Breath?oldid=6039051"
Community content is available under CC-BY-SA unless otherwise noted.