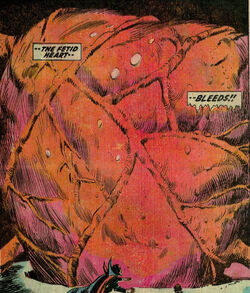 The Devil's Heart was created when a Sioux necromancer who trafficked in death to sustain abnormal life breached cosmic balance until he was presumably transformed into the shape of a gian heart. In modern times it possessed people to commit vilence and murders, amongst them Paul Carpenter and Father Aimes. It came into conflict with Dracula when it had Paul kidnap his daughter Bevely who had ma Dracula's aquaintance. It was destroyed when Paul under the Heart's control killed his daughter[2].

Like this? Let us know!
Retrieved from "https://marvel.fandom.com/wiki/Devil%27s_Heart_(Earth-616)?oldid=5436445"
Community content is available under CC-BY-SA unless otherwise noted.