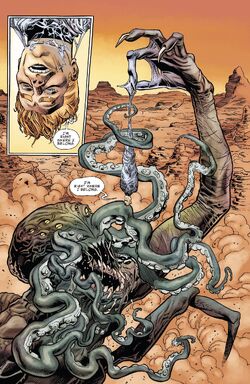 Devondra was a Soul-Eater that resided in the Soul Gem's Soul World where she devoured any souls that ended up getting sent there. It was alleged that if Devondra devoured enough souls, she would be able to weave a new reality from the silk she generated.[1]

Due to an imbalance, though, Devondra caused the Soul World to transform from a paradise to a hellish wasteland.[2] After retrieving the Infinity Stones, Requiem attempted to rebalance Soul World,[3] by folding the universe in half and merging the halves together to form Warp World, a pocket dimension sealed inside Soul World. Once Devondra devoured enough souls in Warp World, Requiem planned to use Devondra's power to create a new reality where there would no longer be any suffering.[4]

After being sent into Warp World, Loki assembled the Cosmic Avengers to stop Requiem. He tried to recruit Adam Warlock, but he wanted to remain in Soul World and fight Devondra. Because of this, Emma Frost telepathically contacted Warp World's other heroes and asked them to aid Adam in fighting Devondra.[5]

The Cosmic Avengers were eventually able to defeat Requiem and retrieve the Infinity Stones from her possession. Before they could restore the universe, they needed to deal with Devondra. The Hulk put an end to Devondra by generating a black hole with the Space Stone that gradually grew and destroyed the monster.[6]

Reality Manipulation: Devondra had the power to warp reality on a possibly universal scale and even create a new universe, but this was dependent on the amount of souls she devoured.[1] Devondra could also use this ability to project dreamlike realities onto other beings, like Hank Pym's soul fragment, in order to lure and devour them.[7]

Regenerative Healing Factor: Devondra was able to heal from devastating injuries in a matter of seconds.[5]

Like this? Let us know!
Retrieved from "https://marvel.fandom.com/wiki/Devondra_(Earth-616)?oldid=6203852"
Community content is available under CC-BY-SA unless otherwise noted.