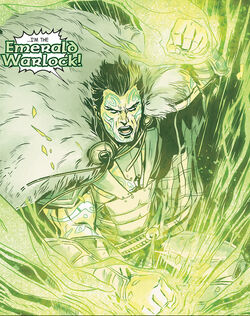 Recognized by many names over the centuries, Dian assumed the alias of Declan Dane and was most commonly known as the Emerald Warlock.

In 600 B.C.,[3] Dian came from Athens to Ireland along with his mother, the Great Dark Warrior Sorceress Carman, and his brothers, Dub and Dother; however, their invasion was repelled by four mages calling themselves the Tuatha Dé Danann and the boys were exiled to North America where Dian murdered the others to claim their power as his own.[1]

At the end of World War II, he was recruited by U.S. Army Major Alan Dakor, alongside The Ghost Dancer and Agatha Harkness, to join the Department of the Uncanny and help stop the threat of Hilda von Hate.

When Hilda seemingly resurfaced in modern times, the still youthful Dane, and the elderly Ghost Dancer, teamed up with the Avengers Unity Division to stop the zombie curse being spread from the site of her first defeat, discovering the source of the disturbance to be Erida, the Goddess of Hatred.

In the aftermath; however, the Emerald Warlock killed the Ghost Dancer and revealed himself to be a force for evil, then turning his sights on the Scarlet Witch.[2]

Declan began his attack on Wanda with a Taigheirm, the supernatural slaughter of countless cats in lower Manhattan, as a sacrifice to summon a Sonneillon, though she was able to exorcise the demon from an NYPD detective and defeat it.[4]

He then turned his attentions to Santorini, where he infused Man-Bull with such power that he believed himself to be the Minotaur. The Scarlet Witch arrived, seeking the advice of Hekate concerning the broken nature of witchcraft energies. After learning of the beast's rampage, Wanda agreed to help in exchange for the Greek Goddess being in her debt.

After luring the monster into an encounter, she used a hex to purge him of the enchantment. The situation concerned Wanda, who discussed it with the ghost of Agatha Harkness; meanwhile, Declan had made sure the Scarlet Witch could never collect on her debt owed, as he had left Hekate a lifeless husk.[5]

He eventually traveled to Lagos, Nigeria to kill the last descendant of the Tuatha de Danaan, allowing him to finally enter Ireland and curse the island. He tried to use Irish spirits to attack the Scarlet Witch, but she was able to repel the assault.[3] Dane confronted the Scarlet Witch on the Witches' Road and attempted to kill her by draining her power. Wanda tricked him when she lead him into the realm of Cerridwen, Nicneven, and Oya, the Mother Goddesses who increase female magic, but diminish male magic. Realizing his defeat, he escaped after calling the Scarlet Witch his archenemy.[1]

He latter appeared in the guise of a demon possessing Gustavo Soledad. The child was related to a legendary sorcerer and Dian wanted to harness the bloodline's power. The Scarlet Witch foiled his plans and exorcised the boy, but Dane fled before they could face one another properly, unwilling to show his face. He later commented how much he enjoyed fighting Wanda.[6]

Like this? Let us know!
Retrieved from "https://marvel.fandom.com/wiki/Dian_(Earth-616)?oldid=5697624"
Community content is available under CC-BY-SA unless otherwise noted.