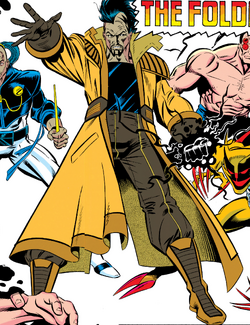 Diego Casseas' wife was one of the brides of the Dragon's Breath cult that Diego's military unit, the "Half-Fulls", encountered in Cambodia during the Siancong War. The cult had been breeding superhumans for centuries, hoping to tap into the vast power of the Well of All Things, a mystic portal in an ancient temple. The Half-Fulls became part of this breeding program, most members fathering a child with a cult member. Diego's wife died and their mutant daughter were left comatose after a fall in an elevator.[1] Diego, having studied sorcery, stole his daughter's powers soon after and became the Left Hand.

The Left Hand then began gathering the children of the pact and founded the Folding Circle. The Left Hand died when he fell into the Well of All Things after Tai was shot by Night Thrasher.

The Left Hand had the ability to teleport himself and others and to project a destructive energy from his left hand using Darkforce. His powers were tied to the Darkforce Dimension, which is accessed by other superhumans such as Darkstar, Cloak, the first Blackout, etc.

Like this? Let us know!
Retrieved from "https://marvel.fandom.com/wiki/Diego_Casseas_(Earth-616)?oldid=5550780"
Community content is available under CC-BY-SA unless otherwise noted.