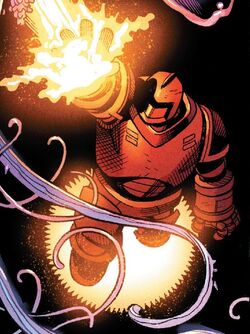 Little is known regarding the past of Dimitri Fyodorovich Bukharin (Russian: Дмитрий Фёдорович Бухарин), save that he was a KGB agent during the Soviet regime in what was USSR. Bukharin was the fifth man to don the Crimson Dynamo armor, directed to do so by his superiors in the Soviet military.[1] The Dynamo joined and spied upon the newly-formed team of superhuman champions, called the Soviet Super-Soldiers. As the Crimson Dynamo, he adventured alongside Vanguard, Darkstar, and Ursa Major, until the three realized he was a spy and expelled him from their group.[2]

Eventually, however, the Soviet Super-Soldiers were considered an embarrassment to the Russian government. The loyal Crimson Dynamo joined a new team of Supreme Soviets who were sent after the Super-Soldiers before they could defect to America, beating them into comas.[4]

For a time, Bukharin wore the armor as a solo operative for the Soviet government, and received a revamped suit of armor. This led Bukharin to clash the with armored American hero, Iron Man, who was on a crusade to eradicate weapon systems with technology similar to Iron Man's own, technology which the new Dynamo armor was comprised of.[5]

Soon, political strife in the downfall of the Soviet Union led to warring factions in the government. An ambitious officer named Valentin Shatalov wanted to claim the Crimson Dynamo identity for himself. In doing so, Bukharin was assigned a mission to revive the former Soviet agent, the Titanium Man, a mission that led to a destructive battle in America between the two. Framing the Crimson Dynamo as performing a rampage against America, the government relieved Bukharin of duty as the Dynamo, and Shatalov replaced him. The Soviet Union was no more, but the non-armored Bukharin was still a member of the Supreme Soviets, politically renamed the People's Protectorate. His superiors in the Protectorate's management gave him a new armor and a code name: Airstrike.[6]

Bukharin eventually retired as both Dynamo and Airstrike to become an administrator. Once the People's Protectorate merged with their rival squad Siberforce to become the Winter Guard, Bukharin became mission supervisor for the Guard.[7]

Following the events of the Skrull Invasion, Colonel Bukharin aided Iron Man by loaning him his Crimson Dynamo armor so that he could reach a secret Stark International base in Kirensk and by refusing to allow Norman Osborn to enter Russian airspace.[8]

After several replacement Crimson Dynamos were killed or fired (namely Boris Vadim and Galina Nemirovsky, respectively), Bukharin returned to the armor alongside the original Soviet Super-Soldiers as active members of the Winter Guard.[9] Not long afterwards, when the Winter Guard tried to capture the Intelligencia, the group of villains used a Zero Cannon on them, sending the team to space, but they still survived.[10]

Dimitri eventually retired from service and withdrew to the Ural Mountains. He was soon approached by his former teammates in light of the Russian government's desire to revamp the Winter Guard due to an increase of global tensions, marked by the Avengers answering to King T'Challa of Wakanda and the formation of the Defenders of the Deep by Namor to drive off human presence in the oceans, a mission that included the attack of Russian submarines in the Black Sea. Dimitri reluctantly agreed to return to the mantle of Crimson Dynamo to lead the team, and they intercepted the Defenders of the Deep during an attack in Hydropolis, where the Avengers were already engaging Namor's team. Even though the Winter Guard and the Avengers worked together at first, in-fighting between Winter Guard members Perun and Chernobog resulted in She-Hulk attacking them. Crimson Dynamo retaliated against her, causing a fight between the Avengers and the Russian heroes. The battle came to a standstill after the Defenders escaped, and the mysterious new addition of the Russian team, the Red Widow, forced Crimson Dynamo to have his team retreat.[11]

Dimitri is a trained KGB agent, specializing in espionage.

Without the armor, Bukharin possessed all of the conventional vulnerabilities of any normal human.

Like this? Let us know!
Retrieved from "https://marvel.fandom.com/wiki/Dimitri_Bukharin_(Earth-616)?oldid=6440690"
Community content is available under CC-BY-SA unless otherwise noted.