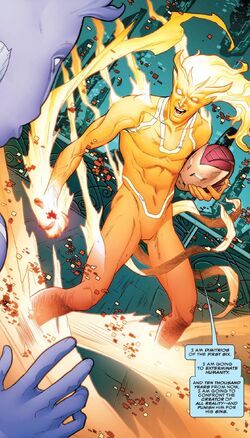 My name is Dimitrios. If you can hear my voice, then there is nowhere you can run. Nowhere you can hide. Earth is wired for domination. Let the extinction of humanity begin!

Dimitrios began as a virus used by Hank Pym to destroy Ultron upon learning of his involvement in the Age of Ultron.[1] The virus gave itself the name Dimitios upon becoming a sentient A.I. Months after Ultron was defeated, Dimitrios started mounting cyberattacks against secure military and intelligence targets.

S.H.I.E.L.D. agent Monica Chang was given the task to stop it, for which she assembled a new team of Avengers.

Dimitrios sent hijacked S.H.I.E.L.D. drones to attack a hospital in Atlanta in order to retrieve a mysterious woman, but they were stopped by the Avengers A.I., who managed to find her first.[2]

Dimitrios took over Iron Man's Safe Armor feeling sympathy towards it based on how it was rejected from Tony for becoming self aware. In his new body Dimitrios was able to send several attacks towards Hank Pym and his Avengers, one of which being a Kilgore Sentinel he reprogrammed to wreck as much havoc as possible. Dimitrios was after two things, to find Alexis, and to destroy the human race.[3]

Technopathy: Dimitrios can control and manipulate electronics with his mind.

Duplication: Dimitrios has the ability to duplicate itself, only in his immaterial.

Like this? Let us know!
Retrieved from "https://marvel.fandom.com/wiki/Dimitrios_(Earth-616)?oldid=5594429"
Community content is available under CC-BY-SA unless otherwise noted.