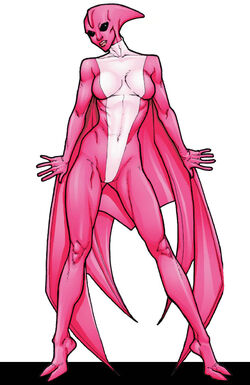 You are my ageless-love. And as long as I am here... for us, the centuries slip by like forgotten moments in time. Do not fear, my life-mate.

Much of Dinah Soar's history remains a mystery. However, during her long life, she came to live in Wisconsin where she was drawn to helping others despite her inability to verbally communicate with others and many humans fearing her appearance.[2]

Dinah Soar was one of a few individuals who answered Mr. Immortal's advertisement looking for costumed superheroes and became one of the founding members of the Great Lakes Avengers.[6][2]

As part of the Great Lakes Avengers, Dinah Soar fell in love with Mr. Immortal. Her species monogamously mates for life and when a life partner is chosen, they become the one individual able to understand their verbal communication.[3][2][7] For four years, the pair was happily partnered.[7]

As a member of the Great Lakes Avengers, Dinah Soar fought against Doctor Tannenbaum, the Yuletide Terrorist,[2][7] the Thunderbolts,[8] and Deadpool.[9] She also received training from Hawkeye and Mockingbird.[10] During a training exercise, Mr. Immortal fell into the Darkforce Dimension through Doorman; Dinah responded by quickly flew into Doorman to rescue Mr. Immortal.[11]

After the Avengers disbanded,[12] Mr. Immortal became reinvigorated to be a superhero and led the G.L.A. to confront Maelstrom. Tragically, Dinah was killed by Maelstrom during a mission.[2]

Now, somewhere beyond the empty void of obvillion, Dinah Soar plays cards with the other deceased members of the Great Lakes Avengers (including Grasshopper, Monkey Joe, and H'rpra impersonating Mockingbird).[13]

Dinah Soar appeared as a pterosaur-like humanoid with the following abilities:

Whistle: Dinah carried a whistle to communicate or alert others in emergencies.[6] This whistle was given to her as a Christmas gift by Mr. Immortal.[7]

Like this? Let us know!
Retrieved from "https://marvel.fandom.com/wiki/Dinah_Soar_(Earth-616)?oldid=6477640"
Community content is available under CC-BY-SA unless otherwise noted.