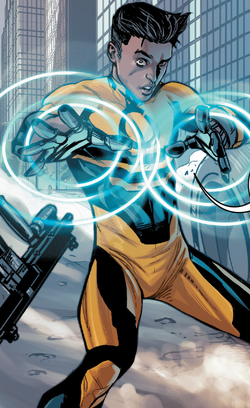 His instincts are good. After what happened to him, with no warning, no explanation, he sees someone trying to hurt people, and... and he does what he can to help.

Dinesh Deol was an Indian engineer. After being affected by the Terrigen Mist cloud resulting from the Terrigen Bomb due to his Inhuman heritage, Dinesh developed the ability to see and psionically control the electromagnetic spectrum.

His Terrigenesis occurred during a film premier, also attended by the film's stars, Ajay Roy and Parvati Mehta. Dinesh stopped Ajay, who had also undergone Terrigenesis and was wreaking havoc before both were attacked by agents of Hydra, seeking to apprehend and forcibly recruit the newly transformed Inhuman hybrids. Queen Medusa, Johnny Storm, Triton, and Naja arrived to assist and ultimately befriended Dinesh.[1]

Magnetokinesis: Dinesh possesses the ability to visually see the electromagnetic spectrum to an unknown degree, but far greater than what is visible to an ordinary human or Inhuman. He is able to psionically control waves of the spectrum and render them tangible to certain effects. For example, using this ability he was able to instinctively, with no training, easily lift an automobile.[1]

Like this? Let us know!
Retrieved from "https://marvel.fandom.com/wiki/Dinesh_Deol_(Earth-616)?oldid=6430101"
Community content is available under CC-BY-SA unless otherwise noted.