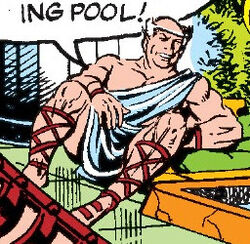 He was one of the Olympian gods active in Earth-829. Hercules mentioned him during his exile.[1]

In Mount Olympus, Dionysus witnessed Zeus Panhellenios brutally murdering Ares in response to the latter's insulting utterances.[2] Soon afterward, Zeus visited the sleeping Dionysus in the latter's bedroom and murdered Dionysus, keeping up with his decided agenda before going after other Olympians.[3]

Seemingly those of the Dionysus Acratophorus of Earth-616.

Like this? Let us know!
Retrieved from "https://marvel.fandom.com/wiki/Dionysus_Acratophorus_(Earth-829)?oldid=6131467"
Community content is available under CC-BY-SA unless otherwise noted.