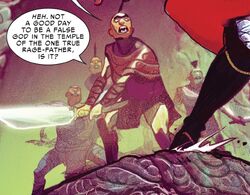 Disciples of Cyttorak were a group of worshippers of the deity Cyttorak stationed in the Crimson Temple in Thailand. They came into conflict against Thor when, as a result of the destruction of Asgardia, all contents of Odin's Vault were scattered across the cosmos. The Warlock's Eye fell in the hands of the Disciples of Cyttorak, and Thor attempted to steal it from their temple. He didn't go unnoticed, and the Disciples tried to chase him off before the Juggernaut confronted him. When Thor summoned an entire arsenal of hammers, he used them as a conduct for his powers, and electrocuted the Disciples. He then used all of the hammers in the process of defeating the Juggernaut.[1]

Retrieved from "https://marvel.fandom.com/wiki/Disciples_of_Cyttorak_(Earth-616)?oldid=5035149"
Community content is available under CC-BY-SA unless otherwise noted.