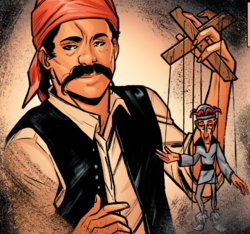 Django lived in Novi Pazar, Serbia near the border with Transia alongside his wife Marya when, having lost their own two children, Ana and Mateo, they were asked to adopt the infants Pietro and Wanda Maxmimoff by the High Evolutionary.[2] They accepted and resolved to raise the children as their own. A skilled woodworker, Django made an art of crafting dolls and selling them to townspeople. Prejudice from the Transian locals forced them to move camp frequently, and hawking his wares was made difficult.

Facing hard times, to feed for his family he was moved to steal. This provided an inadvertent example for a young Pietro who, in turn, stole a great deal more. After being chastised and warned against the perils of theft, a confused Pietro ran away from the Rom camp. For three days Django searched and beseeched the local police for help, which was refused; it was only Wanda's assault at the hands of a village boy that spurred Pietro's return. In light of his and Pietro's thefts, and the belief that Wanda was at fault in the later incident, the villagers convened on Django's camp and attacked. They burned the family wagon, seemingly killing Marya, and clubbed Django from behind. His last words were to urge his children to escape. Believing him dead, they fled.

Django survived the assault, and wandered alone for many years unable to reconcile his grief. He eventually settled in Vladivostok to continue his craft, and his apathy led him to sell a pair of dolls to Nathan Dolly despite knowing they would be used to a villainous end.[3][4]

He came to believe that Wanda and Pietro had in fact been his own children, Ana and Mateo, all along.[4] He surmised that they had abandoned him as penance for the village attack, for which he held himself responsible. Recognizing their Avengers fame, he determined that he would travel to America to make amends and reunite his family.[5][6][7]

In America, he trapped the souls of Wanda and Pietro in dolls he had crafted from the magical wood of Wundagore Mountain with the aid of the Nivashi Stone. Returning with the twins to his hotel room, he explained that they were his children and alluded to their origins. Using magic, he fought off a rescue attempt by the Avengers and fled with the twins, but Vision was able to destroy his Nivashi Stone. Returned to their own bodies, the twins nevertheless decided to accompany Django back to Transia in a bid to discover more about their past.[4]

While there, Wanda was possessed by the demon Chthon and in order to rescue her Django recalled Wanda's soul back into the doll of his creation. Though playing an integral role in her rescue, the spell proved too much for him and he died of a heart-attack before the battle was over.

He was buried by the Avengers, amid the trees from which he had crafted his dolls.

Django had power over various magical energies which allowed him to cast illusions, conjure doppelgängers, transfer souls from one vessel to another and also animate inanimate objects. His powers appear to have been channeled through the Nivashi Stone.

Highly skilled in carving dolls and marionettes from the magical wood of Wundagore Mountain.

Like this? Let us know!
Retrieved from "https://marvel.fandom.com/wiki/Django_Maximoff_(Earth-616)?oldid=6513343"
Community content is available under CC-BY-SA unless otherwise noted.