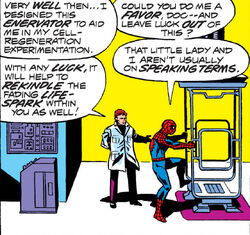 Doctor Curt Connors conceived the Enervator as a device to help him in his investigation of cell-regeneration.[1]

When the Kingpin transferred part of Spider-Man's force to his son in order to save the latter's life, Spider-Man desperately crawled up to Connor's lab to find help saving his life. Connors used the Enervator to restore Spider-Man's life force, though the devices exploded afterwards.

Months later, Connors repaired the Enervator. During a visit at the Empire State University, Peter Parker and Marcy Kane fond Connors on the floor and the Enervator working. Connors looked nervous and soon Spider-Man learned that it was due to him being possessed by the Iguana.[2]

After Spider-Man fought Iguana, Doctor Connors discovered that in an accident he had weeks before his Lizard personality had been transferred by the Enervator to a small iguana he had in his lab. Spidey went to fight the Iguana again but Doc Connors decided to use the Enervator againg on himself to turn into Lizard and destroy the Iguana.[3]

In order to save Doctor Connors, Peter adapted the Enervator into a portable device and wore it where the Iguana was fighting the Lizard. He used the portable Enervator to transfer all of the Lizard's personality to the Iguana and defeated him.[4]

Months afterwards, Moonstone broke into Connor's lab and stole the portable Enervator in order to enhance her powers. During a subsequent fight against Spider-Man, Moonstone lost the Enervator, and the device was apparently destroyed in a building's wreckage.[5]

Retrieved from "https://marvel.fandom.com/wiki/Doc_Connors%27_Enervator?oldid=6016802"
Community content is available under CC-BY-SA unless otherwise noted.