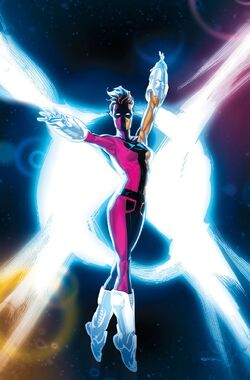 Nenet was an oceanographer, who encountered a strange glowing rock while exploring the depths of the Atlantic Ocean.[1] Under unknown circumstances, she bonded with the stone and became Doctor Spectrum. Four years after the Archetypes of J.U.S.T.I.C.E. fell during the invasion of the Kree and Skrulls, Doctor Spectrum and five other outcast heroes came together to form the Great Society. They were able to repel the aliens and reclaim the Earth, and would serve as its greatest protectors.[2]

After facing and defeating an Incursion by the Mapmakers, the Great Society faced yet another one immediately after, this time facing the Illuminati.[3]

The Great Society no longer had any means to stop this Incursion the same way they had done before. And the Illuminati, who had informed them of their last resort being an anti-matter bomb to destroy the other Earth, tried to convince them to work together in finding a way out of the situation before passing to the worst-case scenarios. However, Namor attacked Rider, and prompted a fight between the two groups of heroes for the survival of their own Earth.[4]

Doctor Spectrum was sent to the Illuminati's Earth to recover their anti-matter injector, whose existence had been acknowledged by the Norn. Black Bolt followed her,[5] and incapacitated her before she could lay her hands on it.

As Doctor Spectrum was left on the other Earth, she was the only survivor of hers, following its destruction at the hands of the Illuminati.[6]

Doctor Spectrum, finding herself alone in Earth-616, banded together with other heroes who had also lost their own universes to form a new Squadron Supreme, with their goal being to protect their new world at any cost.[7]

Their first mission was to punish Namor for destroying Doctor Spectrum's world in Earth-4290001, and cooperating with the Cabal, as well as numerous past attacks he led upon the surface world. They eventually confronted him, along with Attuma and the others inhabitants of Atlantis. Hyperion yanked the city of Atlantis from the ocean floor, lifted it high into the air, and hurled it down, utterly destroying it. Hyperion proceeded to decapitate Namor with his Atomic Vision and Doctor Spectrum then punted Namor's head out of rage.[8]

Unsure of her new world, Dr. Spectrum traveled to the place that reminded her the most of her home, the pyramids of Egypt,[9] but her moment of comfort was interrupted when she was called to fight the Avengers Unity Division alongside her teammates. Dr. Spectrum squared off against Rogue before being incapacitated by Synapse. As the Avengers received back up in the form of the original Human Torch and the agents of S.H.I.E.L.D., Dr. Spectrum and the team were forced to retreat with Thundra and Tyndall, who rescued them by transporting the Squadron into Weirdworld in order to help them save their people.[10]

Once there, they were attacked by Arkon, who was under the influence of something or someone else. Making the matter worse, the atmosphere caused Dr. Spectrum to explode when she attacked Arkon.[11] Dr. Spectrum eventually re-materialized and assisted Skull the Slayer, Thundra and her teammates defeat Doctor Druid, thus rescuing Weirdworld from the clutches of Dr. Druid and releasing its inhabitants from his influence.[12]

The team returned to Earth, and Dr. Spectrum was promptly sent on a mission by Nighthawk to neutralize the remaining Attilan forces and retrieve an object from the allied aliens. After scouting the alien base, Dr. Spectrum was surprised to find the aliens already taken out, putting her face-to-face with Toro. He explained that he was an undercover agent working for the Inhumans and revealed that he wasn't working alone. At that moment Nenet was introduced to Black Bolt, the man who saved her from the destruction of her world.[1]

Energy Projection and Manipulation: Doctor Spectrum can project a blue energy field from her gauntlets on each hand. this energy can be used either offensively as force beams, or defensively shaped into a shield capable of withstanding the likes of a full-power solar burst from Sun God, or transporting team-mates across vast distances. While the energy has other properties such as being able to place people in stasis for healing, and being more resistant when the user is in a passive state it could not defend her from Black Bolt's sonic abilities.

Like this? Let us know!
Retrieved from "https://marvel.fandom.com/wiki/Doctor_Spectrum_(Nenet)_(Earth-4290001)?oldid=5004436"
Community content is available under CC-BY-SA unless otherwise noted.