Marvel Database
Register
Don't have an account?
Sign In
Advertisement
in: Fresh Start, Sorcerer Supreme of the Galaxy, Comics,
and 56 more
English

View source
watch 01:55
Cobra Kai Season 4 - The Loop
Do you like this video?
Play Sound
Part of the Fresh Start event
Part of the Sorcerer Supreme of the Galaxy arc

1. "Sorcerer Supreme of the Galaxy: Part One"

Earth is out of juice for you? Well, Earth is a dust mote, Stephen. There's a whole cosmos out there full of other planets, other galaxies. Other talismans, other exotic relics. Wouldn't you imagine? There must be other Sorcerers Supreme out there, each guarding his/her/its own territories. Go knock on their doors. See what they have to volunteer.

Appearing in "Sorcerer Supreme of the Galaxy: Part One"

Synopsis for "Sorcerer Supreme of the Galaxy: Part One"

Doctor Strange finds himself ensnared by the Elder God X'axal. X'axal begins to taunt Doctor Strange until he calls upon the Flames of the Faltine which hurts X'axal for a brief moment. Strange then uses the Eye of Agamotto to escape from X'axal's dimension through a portal that leads back to New York. Strange uses a spell to close the portal so X'axal, as well as his acolytes, are stuck in their dimension. With the threat adverted, we see Doctor Strange rejoice in his victory... and we are then greeted with a time jump. Seven years later, the narrator notes Doctor Strange's right eye suddenly becomes blind to the mystical world. Two days later, his left eye follows. Shortly thereafter, all of Doctor Strange's magical artifacts slowly die out until no magical life remains inside them; he has lost all access to his magic. Doctor Strange begins to panic, and as he grows desperate his emotions explode as he clutches his now dead Cloak of Levitation, crying into the night.

Completely alone, Doctor Strange tries to call upon some of his old friends to help him, with no luck. He decides that he might as well integrate into normal society, but realizes he simply can't do it. After some time, he calls upon Tony Stark for help. Tony insists that Doctor Strange can regain his magic, and when Strange tells Tony that all magic on Earth has completely disappeared... Tony suggests that he explore the cosmos to find magic. Doctor Strange agrees after Tony offers him a spaceship that is easy to pilot. As Doctor Strange flies over a mysterious new alien planet, a meteoroid hits his ship which sends him crashing into a city. He is quickly rescued, and is greeted by the aliens once he exits his ship. As Doctor Strange asks to be directed to a magic user, an alien responds with "What is 'magic'?". Doctor Strange is subsequently captured and put into prison, where he is trapped.

SORCERER SUPREME… OF THE GALAXY!

The Eye of Agamotto is closed! Doctor Stephen Strange has lost his connection to the Earth’s arcane power, and he can’t wait to recover while nightmares press against the seams of our reality. Tony Stark offers a 21st-century solution: When astral travel fails, try astronautical travel. Enter Doctor Strange: Space-Explorer Supreme! New spells, allies and enemies – new and old – await Strange beyond the stars, along with corners and secrets of the Marvel Universe seen here for the first time! Space is endless, but time is short. After years of threats, Stephen’s bill for magic use is coming due – who will come to collect?! 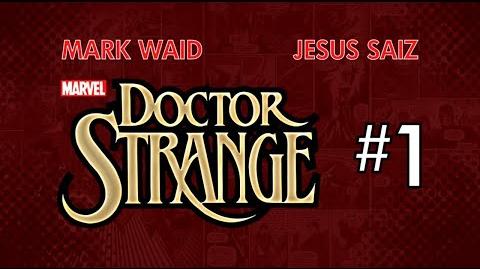 Go Behind The Scenes of DOCTOR STRANGE 1!