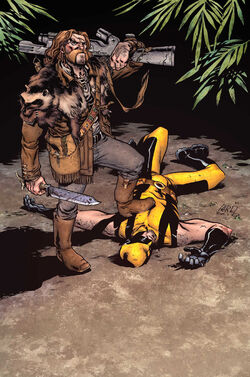 You wanna to teach these kids to survive? You want 'em to know who they really are and what they can be? Then you gotta give 'em the proper motivation. That's one of them lessons you never learned from our pa. But I sure hell did. Dinosaurs were a good start. But I can do a helluva lot better. I'm a better man than you, James Howlett, in every possible damn way, I know you don't believe me. That's why I am about to show ya. You ain't the teacher these kids need. I am. And Dog Logan's class starts now.

Born in 1882, “Dog” was the the son of Thomas Logan, the groundskeeper of the Howlett Estate. His father gave him the nickname, and treated him as if he was a dog, beating him often. In his youth, he played with James and their friend Rose on an almost daily basis.[2]

One Christmas night, John Howlett, Sr. noticed that his son James was too preoccupied by his new puppy to care about a toy train he had also received. In an act of charity, he decided that Dog would enjoy the toy more. Upon returning home with his first Christmas present, Dog’s father discovered the gift, and beat him horribly for accepting charity from the Howletts.[2]

While roughhousing near a body of water, Dog once accidentally knocked James, who could not swim, into it. Dog saved James, and James’ father forgave the incident, stating, “Boys will be boys.” James’ grandfather, on the other hand, believed that Dog should be taught a lesson for being so careless and convinced his father to beat him when he returned home.[2]

After growing up around her, Dog developed feelings for Rose, but lacked the ability to show it. He did what he was accustomed to, and attempted to force himself on Rose. He failed, as James happened upon them and distracted him, saying he'd run off and tell his father. Rose then managed to smack Dog and get away. Mr. Howlett asked Thomas to discipline his son. Dog then later attacked James for ratting him out, and his pet dog rushed over and bit Dog, resulting in Dog killing it. Mr Howlett then fired Dog's father.[3]

In a surprising turn of events, Thomas did not blame Dog this time, but instead blamed “Soft John” (James' father) for raising such a wimpy son. Highly disgruntled, he and Dog headed to the Howlett Estate with rifles to talk with his former employer.[3]

They killed several of the workers at the estate, and used Rose to get into the room where James’ mother resided (to try to convince her to leave with them). There, Thomas shot John in the head, killing him. This enraged James to the point that he ran directly at Thomas, stabbing him in the chest with his newly revealed claws. James then slashed the new claws across Dog’s face, causing him to run away bleeding profusely. James' mother, overwhelmed by grief, killed herself with Thomas' gun.[3][4]

After the deaths of his parents, murdering Thomas and disfiguring Dog, James and Rose left the estate. James' grandfather and the police questioned Dog about the incident, and he claimed that Rose was the killer.[4]

On his deathbed several years later, Mr. Howlett (who sought to make amends with James), asked an older Dog to find the two. He revealed that he knew where the train they took was destined all those years ago. Dog set out to find them, and came upon a desolate camp where he found an elderly man watching people come and go. Dog asked the old man where they might have gone, and he suggested a mining camp. Dog thanked him by snapping his neck. When James and Dog finally met again, James didn’t even remember where he came from, as the trauma of losing his parents and killing a man at such a young age affected his memory. Dog attempted to kill James and seemed to be winning until James suddenly remembered his past and turned the tide. James popped his claws in preparation to kill Dog, but Rose got in the way. James accidentally killed her. Dog fled the scene.[5]

Dog was been seen hunting down young Logan and his wolf pack, later appearing to be transported to modern day New York, intent on getting revenge on Logan.[6]

In the Canadian Wilderness, Dog came back to his cabin with some dead wolverine he hunted, he cooked it and took a bite. As he was eating, Dog's wall full of newspaper clippings about Wolverine's new school he just opened up in Westchester.[7]

While in the present in his cabin, he was greeted by a future version of himself, who told him it was time for him to start hunting his brother in the Savage Lands, without giving out anything of the outcome of the battle. Now armed with time diamonds and motivated by his future self, Dog tried to prove that he was a better Logan, a better teacher and a better mentor than Wolverine. Once in the Savage Land, he shot down Wolverine with a laser pistol while he was jumping around the trees.[8].But after being confronted by Quentin Quire and the rest of Wolverine's students he saw the errors of his ways and gave up.[9] After he escaped, he later killed his future self and was offered a teacher's job at the Hellfire Academy, which he accepted.[10]

Now part of the Hellfire Academy, Dog was in charge of the Physical Education of the students and was known as "Coach Logan". Despite being their teacher, Dog had no problem drinking alcohol during class.[11] Dog also suspected that Idie had an ulterior motive into joining the Hellfire Club and was hiding something.[12]

Later on he helped Quentin Quire escaped from the jails of the Hellfire Academy to repay him for the lesson he gave him when they met in the Savage Land and as a way to make up for beating him up. Shortly he met Sabretooth for the first time who told him that he "must be the Runt's big brother that no one ever heard of or cared about" to which Dog responded: "And you must be the guy who's always wished he was."[13]

As the character's original appearance took place in the late 19th century, the character may not age at a normal rate. However, this could also be due to his ability to time-travel. Other powers have not been demonstrated.

Dog Logan is a capable fighter and an expert tracker.

Like this? Let us know!
Retrieved from "https://marvel.fandom.com/wiki/Dog_Logan_(Earth-616)?oldid=6076218"
Community content is available under CC-BY-SA unless otherwise noted.