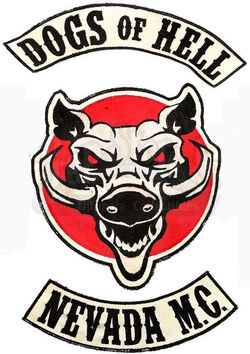 The Dogs of Hell are a motorcycle gang with chapter across the United States of America. Lorelei of Asgard came to Earth and used her powers to control the gang starting the their leader Rooster. She then had them steal for her but this brought them to the attention of S.H.I.E.L.D. who was also working with Lady Sif. Rooster then killed his own wife to appease Lorelei. S.H.I.E.L.D. arrived at their bar which caused a siege. Ultimately the gang was taken down and Sif took Lorelei into custody.[1]

Another branch of the gang, operating out of Hell's Kitchen, was visited by Foggy Nelson in an attempt to find out who slaughtered 16 Irish gang members in the area. The president ordered Foggy to be injured by the Seargent at Arms, but after explaining that he had helped another member named Pope, Foggy was given the information he was looking for and let go.[2]

The gang sustained a slaughter similar to the Irish out on I-90, where their member and Foggy's friend, "Smitty", was killed.[2]

A few months later, all members of the Dogs of Hell's New York chapter had been killed off by The Punisher.[3]

Like this? Let us know!
Retrieved from "https://marvel.fandom.com/wiki/Dogs_of_Hell_(Earth-199999)?oldid=6224726"
Community content is available under CC-BY-SA unless otherwise noted.