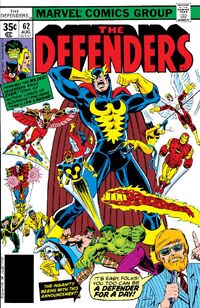 Protagonist(s)
Defenders, Defenders for a Day

Dollar Bill is an aspiring television director and an associate of the Defenders. He uses footage from the team's latest fights to create a television documentary called the The Dynamic Defenders, sells it to a television channel, and has it broadcast. All without the team's permission. In the documentary itself, Dollar Bill reveals the existence of the team to the world, the location and exact address of their headquarters, and invites more heroes to join the team. The following day, a small army of new Defenders turns up at the Defenders' headquarters. Nighthawk tries and fails to get rid of them.

After a few more resignations in their ranks, the Defenders and Defenders for a Day split in three groups to search for the villains. One is led by Hercules, another by Nighthawk, and the third by Valkyrie. Nighthawk soon alienates his entire group, and they all resign in protest. Hercules leads his group in several fights with a sub-group of the villains which is led by Sagittarius. The villain Blob almost manages to kill Hellcat by choking her to death. The near-death experience activates he dormant psionic powers, which blindly blast every hero and villain in her vicinity. She is left standing among the unconscious bodies of her friends and foes.

Valkyrie leads her group (and Nighthawk) in battle against Libra's group, though Libra escapes unharmed. During the battle, Valkyrie is nearly killed by the villain Joe the Gorilla. She is overcome by warrior madness, hallucinating that she is surrounded by Rock Trolls. She defeats Joe, and then proceeds to attack every hero and villain she sees. She thinks they Rock Trolls. She throws them all on the air, sending them flying away. She mistakes Nighthawk for a Troll assassin and prepares to execute him. He manages to make Val return to reality, though she is horrified by her own actions. He promises to get her medical help, the best doctors that money can buy.

In a subplot taking place in the Soviet Union, the Presence visits the area of Kyshtym, where he had caused a nuclear accident in 1957. He discovers a giant amoeba living in the area, and tries to destroy it. The Amoeba feeds on his energy and then swallows him. Agents of the Soviet Union wrongly believe that he is controlling the amoeba, and that he wants to use it for another attempt at conquering the world. In another subplot, the Soviets discover that Red Guardian, who has recently been mutated into a radioactive being, can not be returned to her normal human form. She is potentially dangerous and difficult to control.

Retrieved from "https://marvel.fandom.com/wiki/Dollar_Bill%27s_Documentary_Disaster?oldid=4473380"
Community content is available under CC-BY-SA unless otherwise noted.