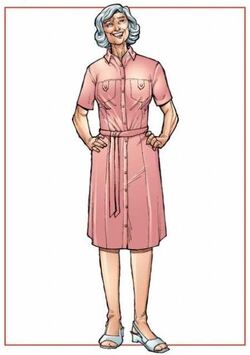 Dolly Donahue was born and raised in Centerville, California, where she eventually became the housekeeper to the wealthy Walker family whose fortune came from the comic book series written by Dorothy about the teenage exploits of her daughter Patsy Walker. Dolly quickly earned a place in the family becoming close friends with Dorothy and a surrogate mother to Patsy.[3] When Joshua left, Dolly moved to Montclair, New Jersey with Dorothy and the children.[1]

When Dorothy passed away, Dolly reached out to Patsy who had taken on the mantle of the Hellcat and joined the Defenders. Dolly accepted this new life and was hired by the Defenders to maintain their headquarters.[3]

During her time with the Defenders, Dolly and Gargoyle (Isaac Christians) developed a romantic relationship.[2]

Eventually Dolly passed away due to natural causes.[2]

Dolly is conscientious, hardworking, charming, nurturing, and amiably with a no-nonsense attitude.

Like this? Let us know!
Retrieved from "https://marvel.fandom.com/wiki/Dolly_Donahue_(Earth-616)?oldid=5519393"
Community content is available under CC-BY-SA unless otherwise noted.