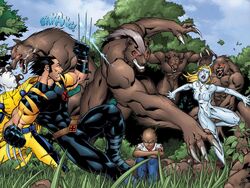 Maximus Lobo claimed to be a part of a mutant sub-species of feral, wolf-like mutants, whom he called the "dominant species",[5] the "true Homo-Superior".[7]

He later tried to recruit Wolf Cub into his ranks, to no avail.[11]

Like this? Let us know!
Retrieved from "https://marvel.fandom.com/wiki/Dominant_Species?oldid=6500718"
Community content is available under CC-BY-SA unless otherwise noted.