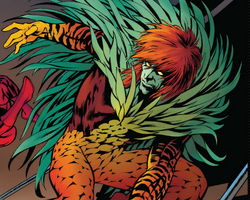 Dominic Destine, also known as Hex, is one of the children of the immortal Adam Destine and the genie-like being Elalyth. As a child, Dominic, who has bright red hair and pale green skin, felt neglected by Adam, whom he saw as aloof. After developing his super senses in adulthood, he became an illusionist and escapologist named Hex. His costume is the one he wore as a performer.

Prior to his brother Vincent's death at the hands of Adam, during one performance in New York City's Greenwich Village, an encounter with a Chinese puzzle box caused Dominic to fall into an occult dimensional realm, from which he was rescued by Doctor Strange. After Adam killed Vincent, and because his brother Walter allowed him to, Dominic, who harbored resentment towards them for many years, retreated to a remote island for 11 years, in part because his enhanced senses feel overwhelmed by the multiple stimuli in more urban areas.

Although Dominic moved back to the Destine family estate following Adam's return to Earth, he refused a reconciliation with Adam, saying that he would never forgive him for killing Vincent. He went to live on Ethera with his brother Newton.

He is able to ascertain whether a building contains machinery or life forms, even from a distance.

Hex is an expert hand-to-hand fighter, with great agility, and his knowledge of pressure points and nerve clusters makes him one of the few people who can hurt or subdue his brother Walter in his monstrous state.

Dominic has a capacity for flawless deductive reasoning. This, along with his enhanced senses, make him the ultimate sleuth.

Dominic is also skilled in stage illusions and escapology.

Dominic's senses can be occluded if they are overloaded by infra-red, microwave and sonic emissions from hi-tech security systems, and being scanned by high-frequency wavelengths can cause him great pain. He can be overwhelmed by the multiple stimuli of urban areas.

When living at the Destine estate, he usually spent his time in an anechoic chamber that his brother Newton built below the manor, which remained after the manor was destroyed.

His brother Newton built Dominic an isolation shell generator for Dominic to wear on his wrist, which creates anti-stimulation aura, as a sort of portable isolation chamber.

Like this? Let us know!
Retrieved from "https://marvel.fandom.com/wiki/Dominic_Destine_(Earth-616)?oldid=5426981"
Community content is available under CC-BY-SA unless otherwise noted.