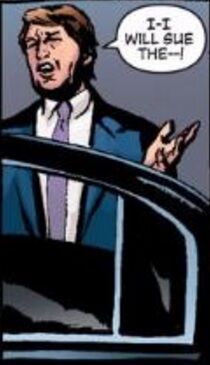 As Donald Trump is a real-life individual, his appearances in the modern age of Earth-616 should always be considered topical reference per the Sliding Timescale of Earth-616. This is because many appearances will ultimately become dated.

Donald Trump's limousine blocked the way of an ambulance responding to an emergency. Luke Cage lifted the vehicle out of the way and carelessly put it back on the street, prompting Trump to threaten Cage with a lawsuit. Cage violently told Trump to get back to his car, scaring him and causing him to quickly jump back into his vehicle and roll up the car's window.[2]

Donald Trump was also depicted as the President of the United States when an alien virus started spreading on Roosevelt Island, President Trump, very nervous, ordered S.H.I.E.L.D. to scorch the island (along with the ten thousand people living on it), an order that was delayed by Nick Fury as long as possible.[3]

Like this? Let us know!
Retrieved from "https://marvel.fandom.com/wiki/Donald_Trump_(Earth-616)?oldid=5938293"
Community content is available under CC-BY-SA unless otherwise noted.