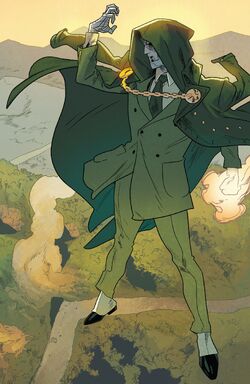 Bah! The indignity! Doom taking orders from an Avenger! Forced to work side by side with simpering peons!

Doombot had been imprisoned by Dr. Hank Pym. However, after the defeat of Ultron, Pym changed his policy about keeping artificially intelligent prisoners and began reprogramming the Doombot.[8][2] As a failsafe precaution to maintain Doombot's loyalty, Pym implanted a micro black hole in Doombot's chest.[9]

When a new A.I. threat calling itself Dimitrios surfaced, Dr. Pym decided to create a special A.I. division of the Avengers. In addition to Vision and Victor Mancha, Pym added Doombot to the roster.[2]

As part of the Avengers A.I. Squad, Doombot helped rescue Alexis is Atlanta,[2] defeat a Sentinel attacking the Washington Monument,[10] and infiltrate The Diamond.[11][12] During his time with the Avengers A.I., Doombot became close friends with Victor Mancha.[13][14]

Following the death of Pym and the disbanding of the Avengers A.I. team, the Avengers seemingly lost track of Doombot.[3] When Doombot learned of the "death"[15] and reactivation of Victor Mancha,[16] Doombot traveled to the Hostel to offer to create him a new body.[17]

Seemingly those of other Doombots.

Seemingly those of other Doombots.

Micro Black Hole: As a failsafe precaution, Hank Pym implanted a micro black hole in Doombot's chest.[9] To maintain its size, the black hole must occasionally be treated with Pym Particles.[18][11]

Like this? Let us know!
Retrieved from "https://marvel.fandom.com/wiki/Doombot_(Avenger)_(Earth-616)?oldid=6432406"
Community content is available under CC-BY-SA unless otherwise noted.