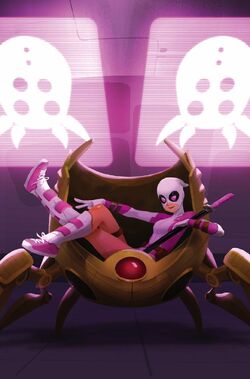 Due to M.O.D.O.K.'s mutated size, he is no longer capable of unassisted physical movement. M.O.D.O.K.'s body is housed within a technologically advanced device which he refers to as his "Doomsday Chair" designed by A.I.M.. The Doomsday Chair, in addition to providing structural support or M.O.D.O.K.'s frame, also magnifies his psionic capabilities to the Nth degree. Though primarily a self-sufficient device, the Doomsday Chair can also be connected to a special energy cradle that provides it with an endless supply of power. Empowering both the chair and the cradle requires massive amounts of energy. Charging it up once caused the entire city of Los Angeles to black out.[1]

Following M.O.D.O.K.'s de-powering,[2] a clone of him named M.O.D.O.K. Superior surfaced. This clone was equipped with a different version of the Doomsday Chair, one which used a set of four mechanical legs as its main form of transportation rather than rockets.[3] The rocket chair function of the Doomsday Chair was still present, though, and could be activated in case the legs were damaged or destroyed.[4]

Retrieved from "https://marvel.fandom.com/wiki/Doomsday_Chair?oldid=6155090"
Community content is available under CC-BY-SA unless otherwise noted.