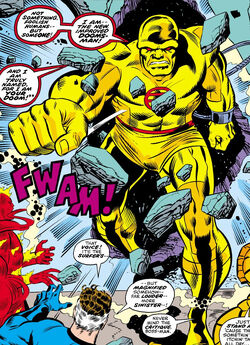 Doomsman II was a giant android created by Doctor Doom as a killing machine powered by the Power Cosmic Doom had stolen from Silver Surfer.[1][2] Doom wanted a powerful subordinate without will to defeat and kill the Fantastic Four, as common minions like the Surfer had proven untrustworthy - the Surfer had just defeated the Four on Doom's orders and took them to Castle Doom in Latveria, but then refused to execute them. Doctor Doom then manipulated the Surfer so that the he sat on a specific chair that drained the Power Cosmic from his body to duplicate it, then returned it to the Surfer. Doom then used the Power Cosmic to feed the Doomsman and activated it, christening it Doomsman after a previous robot of his but believing that Doomsman II was more deserving of that name. Doom quickly tested the robot's loyalty to him, then sent it to destroy the invading Fantastic Four.[1]

The Doomsman attacked the Fantastic Four and put them on the ropes. However, the Silver Surfer joined the fray and the Doomsman was faced with a fifth enemy - one that the robot did not want to fight.[1] The Doomsman was defeated by the Surfer and the Four and apparently was left without any energy[1][2] when it finally fell through a wall leading to Doom's office. Doom decided to not fight his enemies that day, as the combat could habe threatened Latverian artworks in his castle.[1]

Doom kept Doomsman II in the lowest levels of his castle, waiting for a chance to store Power Cosmic again and re-awaken him.[2]

Like this? Let us know!
Retrieved from "https://marvel.fandom.com/wiki/Doomsman_II_(Earth-616)?oldid=5458756"
Community content is available under CC-BY-SA unless otherwise noted.