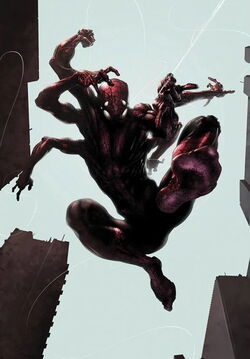 Doppelganger later joined up with Carnage, Shriek, Carrion, and Demogoblin during the infamous "Maximum Carnage" killing spree. In the process, Shriek became a sort of adopted mother to Doppelganger, making him even more dangerous as he followed Shriek's instructions in battle against Spider-Man. Later, when Carnage turned on Shriek, Doppelganger intervened and Carnage stabbed the Doppelganger and threw him off of a skyscraper.[6]

Doppelganger reappeared and attacked an armored car in an attempt to free Shriek. Before Spider-Man and Iron Man could intervene, he was defeated and cut in half when shot by Royal Blue.[7] At Hall Industries, he revived and escaped with Shriek to find Cletus Kasady.[8] After Kasady returned as Carnage,[9] he and Shriek helped him to spread chaos in Manhattan until Iron Man and Spider-Man defeated Carnage with the help of Scorn, Carnage's new spawn.[10] He later escaped with Cletus to Doverton, Colorado.[11] The Doppelganger assisted Carnage in his takeover of Doverton, but it escaped after a bomb was dropped on the city.[12]

Doppelganger was later shown - fully recovered - among the Spider-Army assembled to help combat Morlun and the other Inheritors.[13]

Sometime later, Doppelganger and Shriek were recruited by Carnage into the Cult of Knull, a cult dedicated to the worship and revival of the dark elder god Knull, and began assisting him in harvesting the codices of former symbiote hosts.[14]

After Carnage's take over of Ravencroft Institute, Doppelganger and Man-Wolf assisted Carnage in resurrecting Demogoblin using Shriek's corpse as a vessel, the ensuing entity calling herself "Demagoblin." However, Misty Knight had escaped Ravencroft, leaving Demagoblin to chase after her.[15] After that, Deadpool arrived, unaware of what was happening, causing the cult to attack him. However, Deadpool set the asylum on fire, destroying it.[16] Kasady and his cult returned to the Spire underneath Grand Street.[17]

After Carnage's downfall, the Doppelganger was captured by the authorities and imprisoned in the rebuilt Ravencroft.[18] When a group of vampires took over Ravencroft they released all of the prisoners, including Doppelganger.[19]

Superhuman strength, agility, stamina, reflexes, speed, and the ability to shoot razor-sharp webbing. He had hardened talons that could tear through human tissue and he could cling to walls like Spider-Man. He was noticeably unintelligent, seemingly limited to instinct similar to a dog or a cat, although he was capable of following instructions from his 'mother' Shriek. his body was also somewhat malleable and could form different shapes, although this attribute was seen much less in the issues he appeared in just prior to his apparent death.

The Spider-Doppelganger was stronger than Spider-Man; the upward limit of what he could lift was somewhere under 25 tons.

Like this? Let us know!
Retrieved from "https://marvel.fandom.com/wiki/Doppelganger_(Spider-Man)_(Earth-616)?oldid=6118693"
Community content is available under CC-BY-SA unless otherwise noted.