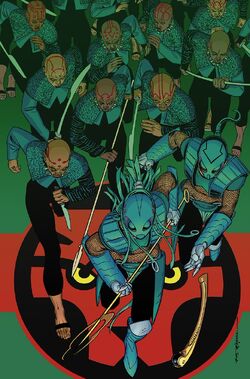 The Dora Milaje (pronounced "DOR-ah muh-LAH-jay")[3] are the personal bodyguards of the Black Panther, recruited from every tribe of Wakanda. In addition with their protective function, they are also a pool of superior Wakandan women. An ancient tribal tradition, the Dora Milaje were assembled as potential queens for an unmarried king, maintaining the peace in Wakanda by ensuring that every tribe has the opportunity to put forward one of their daughters for the crown. Dora Milaje traditionally speak only in the Hausa dialect, and only to the king or each other. The practice of employing Dora Milaje was discontinued until recent years.[1][4]

T'Challa, the latest Black Panther, reinstated the Dora Milaje program to calm tribal unrest in the kingdom after his proposed marriage to outsider, Monica Lynne, did not occur. The daughters of Wakanda, Nakia and Okoye, became the first Dora Milaje to serve under T'Challa.[1] Despite tradition and the girls' considerable skill and beauty, T'Challa viewed the teenage bodyguards like daughters, not actual wives-in-training.[5]

Okoye understood her king's wishes, but Nakia dreamed of winning the king's love. When T'Challa was manipulated into passionately kissing Nakia while under the influence of Mephisto's illusions, it only fueled the girl's obsession.[6] After Monica Lynne re-entered T'Challa's life, Nakia's jealousy caused her to eject Lynne from a fighter plane during a war, and she was expelled from the order of the Dora Milaje.[7] In the months to come, Nakia was revived by Erik Killmonger and became an obsessive stalker of T'Challa, as well as his allies, under the alias of Malice.[8]

Okoye was later joined by a new recruit in the Dora Milaje: Chanté Giovanni Brown, of Chicago. Princess of the outlawed Jabari Tribe, worshipers of the White Gorilla, Chante had been exiled to the United States of America during the tribal warfare that killed her parents. She only learned of her Wakandan heritage when T'Challa approached her and inducted her into the Dora Milaje; however, it was still several months before T'Challa explained the circumstances of her parents' death.[9]

Over time, the order of the Dora Milaje expanded considerably, with more than a dozen active participants from the various tribes. Their service continued even after T'Challa's marriage to Ororo.[10]

During the Civil War, the Dora Milaje assisted T'Challa on a few occasions, on their quality of body-guards.When Storm and T'Challa visited the White House, an incident led the Dora Milaje to battle War Machine and his Sentinels, and they were subsequently researched by the U.S. Government.[11]

Later, T'Challa intended to meet Captain America, in order to organize the resistance against the Superhuman Registration Act, but was followed by the Black Widow. To get rid of her, T'Challa let two Dora Milaje confront her.[12]

Iron Man and Cape-Killers came to the Wakandan Embassy in order to arrest the Dora Milaje who had attacked Rhodes, but were denied access to the embassy by Storm.[13]

After a fight with Doom, who cost the lives of two Dora Milaje and handicapped him for a time, T'Challa decided to initiate a specialized fighting style for the Adored Ones so they can better perform against robots and magic, which are Doom's primary weapons in battle. T'Challa set up a final test, which was a real fight, during which two Dora Milaje died among the thirty candidates.[14]

When Doom tried to take over Wakanda, the Dora Milaje paid a large tribute, with 500 Doras against the 80,000 soldiers of the Wakandan Army and Navy. They then were used as Shuri's army to destroy Doom's global network. T'Challa intended to kill Doom, sending Deadpool and a commando of Dora Milaje known as the Midnight Angels.[15]

During the last moments of the War with Thanos, the Dora Milaje rejected T'Challa, denouncing to Shuri the meetings of her brother with Namor while war was declared on Atlantis following Namor's attack against Wakanda while he was under the influence of the Phoenix. They broke their spears symbolically and fully came under the orders of the Queen Shuri.[16]

A Nation Under Our Feet

An apparent revolution within the Dora Milaje originated when Ayo and Aneka seemingly stole two prototypes of the Midnight Angel Armor and defected from the Black Panther's regime.[17] Believing that Wakanda deserved a better government, Ayo and Akena began to liberate oppressed Wakandans they believed the crown had neglected for too long, starting with a bandit compound in Northern Wakanda that captured women, rallying them, including Mbali.[18]

When the village where the Midnight Angels and the women they liberated were staying was ravaged by the White Gorilla Army forces of the Jabari-Lands, they fought back, becoming an army of self-proclaimed Dora Milaje.[19] Joined by the Jabari Tribesmen and other Dora Milaje, the Midnight Angels killed White Gorilla, Lord Mandla and took control of the Jabari-Lands, convening tribunals, assembling communes, calling for elections, writing laws, and gaining the support of numerous Jabari tribesmen in the process.[20]

Following the conquest of the Jabari-Lands, the Dora Milaje were offered the support of another rebel force, the People, led by Tetu; however, Ayo and Aneka remained cautious.[20] In spite of this the Dora Milaje established an alliance with the People after being assisted to fend off an attack from Black Panther's Hatut Zeraze.[21]

When Ezekiel Stane leaked a footage of Jorick Kroawl, former Intelligence Directorate, presenting his violent anti-revolutionary tactics to T'Challa (who had refused to apply those), the strife grew bigger.[21]

Soon, T'Challa attacked the Jabari-Lands to restore order, sending the Hatut Zeraze against them. The attack was thwarted by Zenzi, an ally of Tetu, and her empathic powers. The Hatut Zeraze were then taken as prisoners by the Midnight Angels.[2]

The Midnight Angels and the People later planned to carry out a coordinated attack against the Golden City; however, it resulted in nothing when the Midnight Angels confronted the People for the violent tendencies of their soldiers towards women "liberated". Convinced by Mbali, the Midnight Angels later liberated the Hatut Zeraze they had taken prisoners in order to shown they wouldn't give in to violent methods in order to liberate Wakanda, and to foment empathy among the people of Wakanda. Once she had ended her message, publicly announcing that she had rejected T'Challa and the monarchy, Aneka ran away in the woods, screaming that they had no country anymore, only to face the returned queen, Shuri.[22]

Shuri confronted Aneka, and subsequently Ayo, and asked them to assist the Black Panther in defending the Golden City from the upcoming assault carried out by the People. Even though both Dora Milaje leaders opposed the idea of helping the king, Shuri presented the compelling argument that T'Challa was a man of honor, unlike the leader of the People, who would surely not doubt to turn on the Dora Milaje as soon as he had vanquished the crown.[23]

Following the People's defeat in the Golden City,[24] T'Challa held hearings for the Dora Milaje at Birnin Azzaria, during which the Midnight Angels demanded for their lands to be made independent. The elder Changamire made Aneka realize the value of their king, and eventually made peace with him. T'Challa himself set out to form a council to write down a constitution so Wakanda could have a democratic government, one where he would remain the king, but solely as a representative of his people and not their ruler.[25]

Like this? Let us know!
Retrieved from "https://marvel.fandom.com/wiki/Dora_Milaje_(Earth-616)?oldid=6465797"
Community content is available under CC-BY-SA unless otherwise noted.