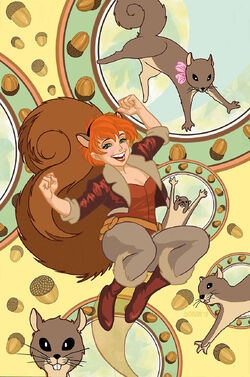 I didn't know what the @#!*% was going on. But it was an invasion. Right here in America. An invasion! And my first thought -- my first thought was: The baby! I've got to find and protect the baby. And maybe that doesn't surprise you, but it surprised the @#!*% out of me. I will confess this... When I first auditioned to be the nanny, I was really hoping that the Avengers would notice me and say amongst themselves: We really need her on the team. I took this job hoping to be an Avenger but now all I cared about -- all I cared about was protecting the child.

Doreen Green was born to Dorian and Maureen Green. She suffered a modification in her genes for unknown reasons that granted her squirrel-like abilities, which manifested predominantly in the form of a prehensile tail. When her parents consulted with a doctor, it was determined that Doreen wasn't a mutant, even though she believed so for a long time.[1]

When she was ten years old, Doreen discovered she could communicate with squirrels after overhearing one of these rodents in her window. She subsequently saved this squirrel from being chased by a dog, and they became friends. The squirrel, who identified himself as Monkey Joe, encouraged Doreen to use her abilities to help people. Ever since then, Doreen began to fantasize about becoming a superhero, and came up with the alias of the "Unbeatable Squirrel Girl."[8]

When she was fourteen, Doreen ambushed Iron Man in a California forest near Stark Enterprises Headquarters and hoped to impress the veteran hero, wishing him to take her under his wing as his sidekick. Unimpressed, Iron Man politely declined, when suddenly the duo was attacked by Doctor Doom in a large aircraft. Doom captured and subdued Iron Man, and began to fly out over the Pacific Ocean where he planned to dispose of Iron Man's body once he killed him. Underestimating her, Doom left Squirrel Girl to her own devices. She devised a plan and used her ability to communicate with squirrels through an open door as the ship passed over the forest. Hundreds of squirrels answered her call and flooded Doom's ship, chewing through the wires, and swamping the evil dictator with their furry bodies. Iron Man was freed, they emerged victoriously, and the two heroes went their separate ways.[2]

Shortly after her fifteenth birthday, Squirrel Girl assisted was the Hulk, who landed unconscious one day next to her treehouse in the middle of a fight against the Abomination. A concussion had blinded the Hulk, so he had to reluctantly accept Squirrel Girl's help. After swarming Abomination with squirrels, Doreen directed Hulk how to move to land punches and dodge attacks until the villain was knocked out.[8]

Squirrel Girl later relocated to New York City. While fighting crime in Central Park, she saved the Great Lakes Avengers from muggers, for which the GLA recruited her. Alongside her new teammates, Squirrel Girl witnessed the death of Grasshopper and became very frightened, but was determined not to give up. Thanks to her squirrel army, Squirrel Girl was able to help stop Maelstrom from destroying the world.[9]

After Squirrel Girl made a fuss to be certain that Monkey Joe was an official member of the team, he was apparently killed by Doctor Doom seeking revenge. In actuality, this was a rejected member of the GLA named Leather Boy in a variation of Dr. Doom's costume. Squirrel Girl found a new squirrel companion, the only one of her squirrel army who had survived Maelstrom's wrath, whom she named Tippy Toe.[10]

Squirrel Girl and Tippy Toe managed to individually defeat M.O.D.O.K., Terrax, and Thanos. Uatu, the Earth's Watcher, was on hand to confirm that the Thanos she defeated was the real thing, and not a clone or copy of any kind.

After M.O.D.O.K.'s defeat, Dum-Dum Dugan offered Squirrel Girl a position at S.H.I.E.L.D., explaining that they'd been watching her for some time and found her to be one of the most effective people ever at defeating powerful supervillains. Squirrel Girl declined the offer, saying she was happy being with the GLA.[11]

While visiting squirrel friends in Central Park, Squirrel Girl came across the Thing fighting with Bi-Beast. She told the squirrels to retrieve the smelliest garbage they could find and place it around the combatants, resulting in everyone having to hold their noses. Bi-Beast had to use both hands to hold his noses, leaving himself defenseless and allowing Thing to knock him out.[12]

Squirrel Girl and the rest of the newly-renamed Great Lakes Champions, who took the name after winning a poker game, registered under the Superhero Registration Act the morning the law was enacted. However, mercenary-for-hire Deadpool, assuming the Champions were non-registered, attacked the team at their headquarters (Deadpool sought to ingratiate himself with the government by capturing non-registered heroes). Deadpool was bested in combat by Squirrel Girl; his distraction at her appearance and name contributed to his inability to mount an adequate defense to her attacks.[5]

Deadpool and the GLA would later team up a few months later to take down A.I.M. agents who had kidnapped a wayward Olympian God and fashioned an inebriation ray that made every superhero on the planet (save for Deadpool and the GLI) drunk. After the battle, Deadpool decided to hang around the GLI's new government-funded headquarters, as a "reserve member" for a while.[3]

Squirrel Girl was a huge fan of the New Warriors, especially Robbie "Speedball" Baldwin, on whom she had a crush.[13] She learned of Speedball's transformation into the darker hero code-named Penance after Deadpool provided her with a copy of Civil War: Front Line #10. Squirrel Girl traveled to Thunderbolts Mountain to convince Robbie to lighten up and stop being Penance. Frustrated by his current attitude and unwavering determination to remain as Penance, Squirrel Girl traveled to Latveria to use one of Doctor Doom's time machines to travel to the past and prevent Speedball from ever becoming Penance. The machine instead transported her into the future, where she encountered an alternate version of Speedball (whom she unsuccessfully tried to get to travel back to the past with her), and Mister Immortal, who told her she had an important task to perform in the past — namely, kicking Deadpool out of the Great Lakes Initiative's headquarters.[3]

When the Skrulls launched their invasion on Earth, Squirrel Girl and the GLI confronted their latest recruit, the new Grasshopper, who had revealed himself as a Skrull infiltrator.[14] Some time after the invasion was over, Squirrel Girl and her teammates welcomed Gravity to the GLI when he was relocated from Nevada to Wisconsin.[15]

Squirrel Girl eventually realized that she was holding back her teammates, who wouldn't join her in fighting supervillains because she was competent enough to beat them on her own. After defeating Fin Fang Foom while her teammates remained at their HQs calmly playing poker, she decided to unceremoniously leave the GLI and go solo.[16] She would return to New York City not long after that.[17]

Doreen was hired to be the nanny of Danielle Cage and lived in the Avengers Mansion alongside the New Avengers.[18] She looked after the baby through many events, most notably the Serpent's invasion.[19] When Luke Cage left the team, she followed him and Jessica Jones, as she was still the nanny of their child.[20]

After leaving Luke Cage and Jessica Jones, Doreen started living secretly in the attic of the Avengers Mansion until she enrolled in the Empire State University. During her first day of class she encountered who would become her best friend and confidante, Nancy Whitehead, and her cat Mew. Doreen also confronted Kraven the Hunter, and convinced him to give up on his vendetta against Spider-Man.[21] The first major threat that Doreen averted during her stay at ESU was Galactus, whom Doreen managed to intercept as he was approaching the Earth. After bonding with Galactus, Doreen found him Nutopia XXIV, a moon completely forested with nut-bearing trees, which sated his hunger.[22]

While at ESU, Doreen developed a crush on one of her first few acquaintances at the university, Tomas Lara-Perez,[23] later revealed to be the superhero Chipmunk Hunk, who possessed similar powers to Squirrel Girl's, and fought crime together with his friend Ken Shiga, also known as Koi Boi. Both Chipmunk Hunk and Koi Boi became Doreen's friends and allies.[24]

During her second year at college,[1] Doreen became a member of Sunspot's New Avengers,[25] and transitioned into the U.S.Avengers when Sunspot began working for S.H.I.E.L.D. and the American intelligence service.[26] Doreen also assisted the supervillain Brain Drain in reforming and becoming a good-doer himself.[1] During her subsequent adventures, Doreen most notably confronted Doctor Doom in the past[27] and stopped the multiplying villain Enigmo from taking over the United States.[28] For a brief time, Doreen received mentoring and was even gifted a flying suit from entrepreneur Melissa Morbeck, though it turned to be part of an intricate plan of world domination.[29] During a trip to the Savage Land, Doreen teamed-up with Kraven the Hunter to fight a version of Ultron, which cemented him as an ally of Squirrel Girl, and swayed him from the path of villainy.[30]

At some point, Squirrel Girl was able to examine Vincent Doonan and study his Doombot technology in exchange for hanging out with Gwenpool. The two have also teamed-up to rescue Gwen's brother, Teddy Poole, from Mephisto's realm.[31] Gwenpool later remembered that incident fondly while speaking at Doreen's funeral, which was held after a Skrull had staged her death.[6] During the War of the Realms, Doreen was sent on a secret mission by Loki to save North America from the Frost Giants.[32] She ran into Ratatoskr and the two worked together,[33] eventually managing to drive away the Frost Giants back to Jotunheim by sparking a political revolution against their monarchy.[34]

Shortly afterward, Doreen's life was torn apart by Melissa Morbeck. After escaping prison and laying the groundwork for her revenge, Melissa outed Doreen's identity to the public and blew up her apartment.[35] Doreen and her allies were lured to Central Park, where Melissa took over Iron Man's armor to embrace the new identity of Iron Ring, also revealing an alliance of many villains previously defeated by Doreen, including Doctor Doom.[36] The tide of the battle shifted several times, with the Avengers arriving to help, and Melissa outfitting her allies with Iron Man suits in return. When Galactus became aware of the fight, he teleported many of the villains reformed by Doreen to her aid, but she almost died after shielding a bomb planted by Doom.[37] Galactus personally appeared to stop the fight, disarming the villains and teleporting them to prison at Doreen's request. As she moved into a new chapter of her life, Doreen decided to embrace her public identity since it allowed her to live more truthfully.[38]

Squirrel Powers: Squirrel Girl is a mutate with several traits that are similar to or usually associated with squirrels. Squirrel Girl possesses superhuman strength, speed, agility, and reflexes.[39] She possesses the proportional abilities of a squirrel scaled up to human size.[40]

Communication with Squirrels: Squirrel Girl can perfectly mimic squirrel sounds (which she refers to as "Squirrelese"), as well as actually communicate with and direct the actions of squirrels. She often uses a number of squirrels to distract or even assault others, chewing through circuitry and other materials. She shares a close, possibly empathic, bond with certain squirrels, such as Monkey Joe and Tippy Toe.[39]

Regenerative Healing Factor: Squirrel Girl is able to heal at an accelerated rate.[39]

Computer Science Expert: Doreen is an expert in computer science.[40]

Squirrels: Squirrel Girl's deadliest weapons are her squirrels. In addition to Monkey Joe and Tippy Toe, Squirrel Girl gave specific names to several other squirrels.[42] These were named Slippy Pete, Mr. Freckle, and Nutso, and all were presumably killed when they were sucked into the singularity created by Maelstrom.[39]

Like this? Let us know!
Retrieved from "https://marvel.fandom.com/wiki/Doreen_Green_(Earth-616)?oldid=6477920"
Community content is available under CC-BY-SA unless otherwise noted.